I've been wondering the same thing about the wall. I don't think there's anything super special about it. It just looks like a castle themed wall with windows in it so you can see Valravn's trains pass by.

codeGR said:
^ Then why bother even posting that comment?

Do we know anything about this wall? I keep trying to get closer visuals of it from the videos.

I love how you can see the Anti Rollback Devices as they go up the lift. Also, you can see them lift up on the drop with the negative g's and slam back down in positive g's! That's that clank sound you always hear when B&M's hit the bottom of the drop! It's awesome!

Thank you and enjoy your voyage to the sun on the wings of Apollo's Chariot.

^ I like how this guy had his eyes closed all the way till the mid-course brake run. I'm not sure I'll be able to do that. I'm all about looking around the park before my decent down the hill. Example: Millennium Force

Not to mention, I get queasy if I have my eyes closed.

My take continues to be wall and path will serve as a revenue area with plinko and/or other in the area far right of the dive loop. Bringing themeing to your chance dollar.

It would have been fun if the inside of the wall looked like the pirate ship haha.

Did anyone see Mr. Helbig in the background of that video? XD

Sorry for the double post, but this whole wall thing is just weird..... 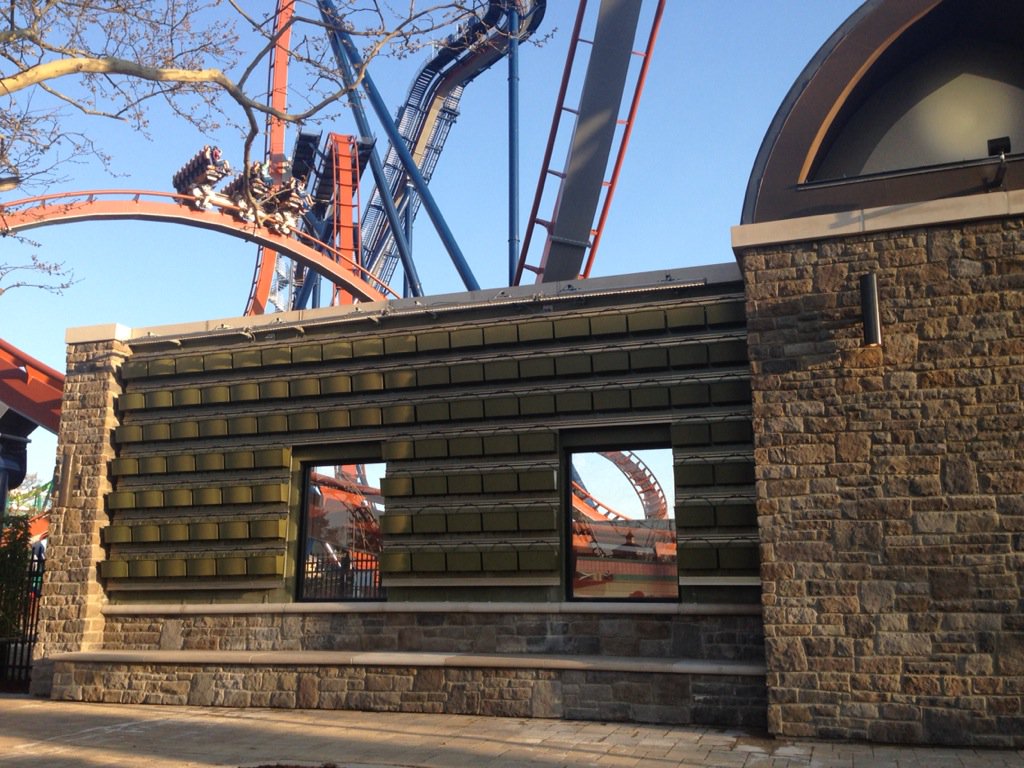 They look like a bunch of water buckets with a set of LED lights at the top. I'm so confused....

Perhaps eventually ivy or other climbing type plant. Lighted feature wall with plant background, so pretty that it makes sense to come to that larger area to the right and drop 5 bucks on plinko. If that wall is not an eventual revenue center then it is the fanciest place to put dining tables in the whole park. Definitely will be one of the new interactive reality photo spots. I think they just ran out of time to get this wall in time. Anything that gets you to linger around a newly furbished brat shack and just happens to exit right there in line.

Yes, there will be some kind of plant growth on the wall.

Ahhhh i can see it now... 50,000 new spiders will call that wall and it's vegetation home.

The park is now open. They should announce what it is.

Lots of finishing touches were added to Valravn last week making it seem much more complete. There are "V" banners in the queue where the arched sections of the wall are. There is also decorative metal finishings around the station exterior and inside the gift shop. They also were working on something behind the wall within the holding pen.

Side note, the inside of the on ride photo part of the gift shop looks so bare. Hopefully they are still going to add a few touches there as well.

What is all over the ground in the holding pen? If it were grass seed, I'm not sure why it wouldn't be the same type they've used previously. This stuff is a bright white color

Snow... This is northern Ohio after all!

Went to Cedar Point on Friday, May 20th. Noticed a couple of things with Valravn.

They changed the Wait Time Sign at Valravn. It now goes up to 2 hours.

I was also wandering why there was no sound for the Music/TV's in the queue line.

That 90 minutes would have gone by faster with some music.