The blimp is back by Cedar Point. At least it’s visible from the top of Millennium Force.

edit: it’s moving at a good speed, and is pretty much past the park now.

edit edit: does anyone know how far out of the way Cedar Point is for the blimp? I can’t imagine it’s on the most direct path. However, as one of the most recognizable advertising icons, there’s a lot of people that can see it at Cedar Point.

I think blimps follow landmarks for their routes. From city to city they may follow the interstate between the two. It may not be the fastest or the shortest, but in case of poor visibility or an emergency landing it’s safer.
I reckon nobody would land a blimp on Lake Erie.

If they follow any of the standard FAA recommendations or regulations I'm not sure which, then they likely have life rafts on board if they're going to cross a body of water like that.


When I worked at Burke Lakefront Airport, there were numerous occasions when the Goodyear Blimp landed not in the lake, but very near the lake. We would have it positioned approx. 1500' south of the shore. It was a nice memory watching the ground crew in action and seeing the Blimp slowly descend, the pilot & crews skillfully navigating the wind conditions.

We happened to be at the park on Saturday when the blimp was flying over and I was able to get a couple of good photos of it as it flew above the entrance sign to the Boardwalk from the parking lot and another as it passed above, but was framed in by the Wicked Twister spires and the Giant Wheel / lift hill for GateKeeper. 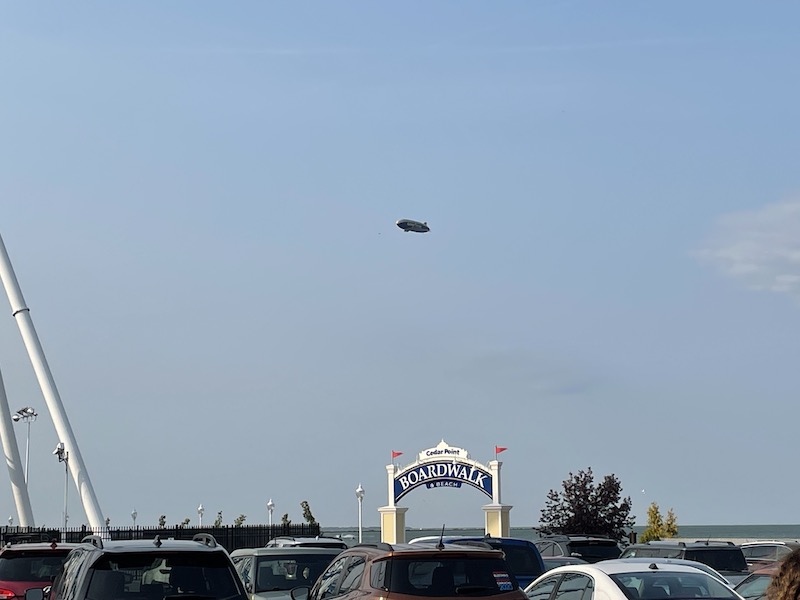 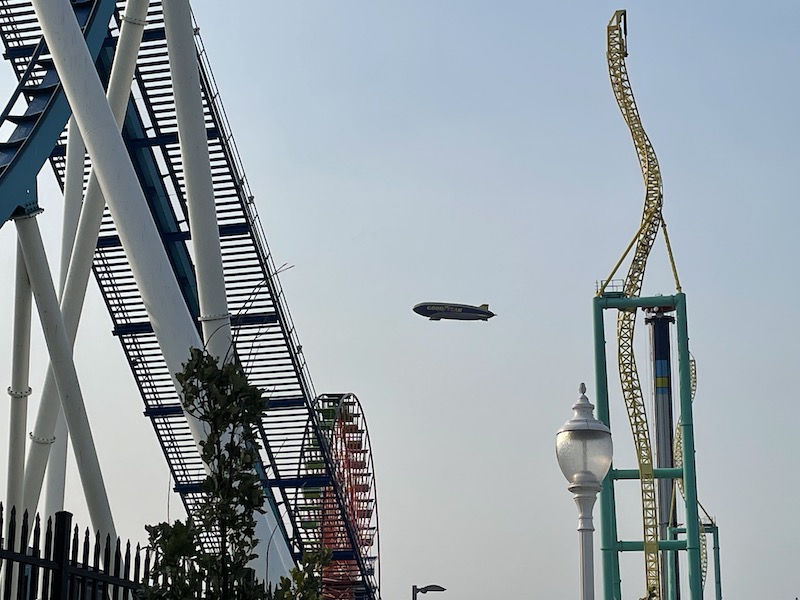 That second picture with Gatekeeper, Giant Wheel & Wicked Twister with the blimp is great! And likely the last time that shot will be possible!

I'm not sure if they have life rafts on board or not. But as said above, if it's an FAA requirement then they likely do somewhere. Having been in the gondola but never taken flight in one of the more recent blimps, I'm not sure where they would store it and I don't recall seeing a label for one anywhere. The odds of landing in the water are very unlikely though. Since it's held up by helium, it would take an absolute catastrophe to end up in the water. Since the helium is put in at low pressure, it won't pop like a party balloon if it were to somehow get punctured. They would most likely be able to get it to an airfield to make an emergency landing. And yes, it is true they mostly follow interstates when going on long distance trips, not necessarily for navigation but to remain close to the ground crew. They have advanced instruments on board for navigation. If visibility is poor, they won't even fly that day. They are very particular about weather conditions when flying. If the clouds are too low or winds are too high, the blimp will be grounded.

Interesting video about the latest models. Did not realize how big of an operation it requires.

If visibility is poor, they won't even fly that day. They are very particular about weather conditions when flying. If the clouds are too low or winds are too high, the blimp will be grounded.

BleauxJays, thanks for posting. Very interesting.