That's a new one. I've been called a blimp nerd, helium head, and blimpologist, but never a blimp savant. Looks like they didn't go near the park. Fudge!

I saw one of the Goodyear blimps docked in L.A. this past weekend. Does that count?

It's nice you got to see that blimp out there because it's being retired next month. That's one of 2 remaining GZ-20 blimps in service while they get replaced with Zeppelin NT's. Here is a comparison of the 2 types of blimps below: 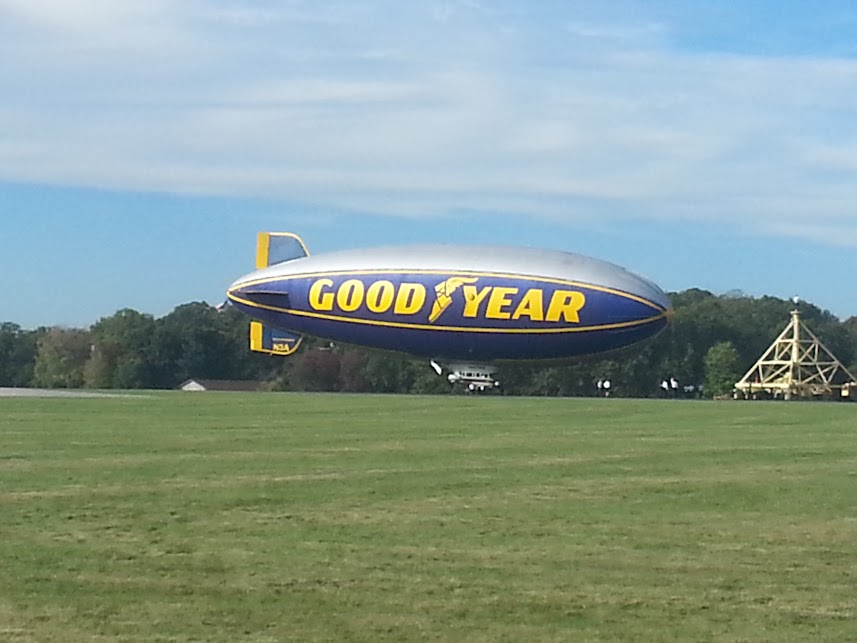 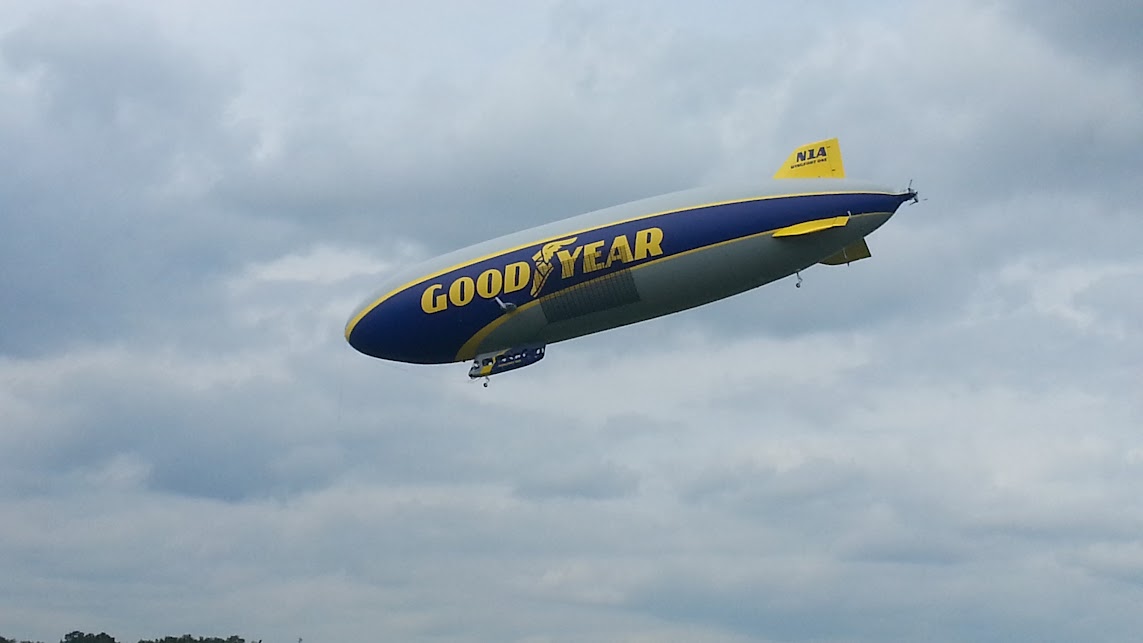 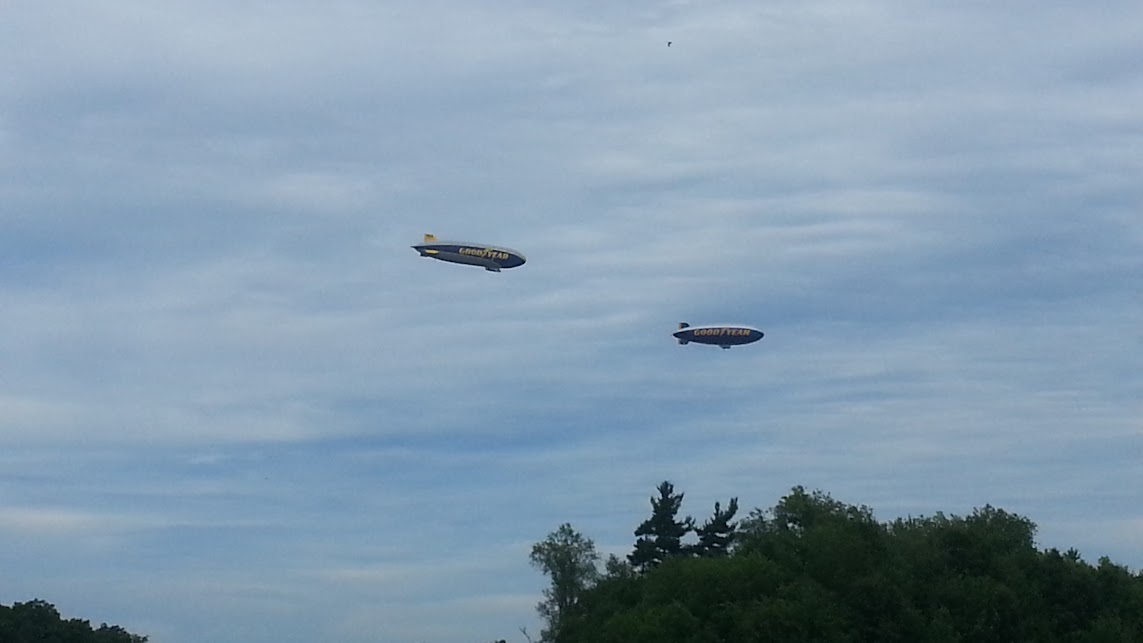 I have photos of a Met Life/Snoopy Blimp flying around the park several years back. Lord only knows where the photos are. I remember snapping a shot with dragster between me and it.

The only blimp/Cedar Point related picture I have. I believe it is from 2010. You'd think a blimp savant would know that the new Goodyear blimp is not a blimp!

I know there is an internal structure inside the new ships, which makes it technically not a blimp, but a semi-rigid airship. Blimp just rolls off the tongue better. Yes, that is discussed and argued to death on blimp forums. Even Goodyear is going to continue to use the word blimp because that's what it's known as and most of the casual observers don't know the difference and will still call it a blimp. "I saw the Goodyear semi-rigid airship flying around today" doesn't roll off the tongue very well.

TriumphBonneville wrote that Wednesday was Hendrick's Gin Blimp. He is correct, I work at Burke Lakefront in Cleveland, that blimp came from the south at about 2:45pm, turned west along the shoreline.

Last month we had the DirecTV blimp at Burke for a few days. We have to close one runway to account for the height obstructions it creates when moored.

We have had several blimps here over the years, including Goodyear. It is always fscinating to watch the ground crews at work guiding it around.

Back up. Did you say blimp forums? Where the nerds argue to death over blimp things that nobody else on earth knows or cares about? Like what, BlimpBuzz or something?

I think I worded that wrong. It should've said blimp Facebook pages and groups. I haven't gone to any blimp forums or a BlimpBuzz (which doesn't exist as far as I know)...yet. There actually are nerds who go to comic book forums and argue about fictional things, which is worse. Now can my blimp obsession be equated to an STR obsession?

I'd love to contribute, but I was busy on a different site arguing about whether Superman's powers are all technically telekinetic in nature and only just got here....

Lol Thabto I was teasing. When I lived in Akron I'd see it all the time. People will come from far away to go to Wingfoot Lake.

...blimp forums or a BlimpBuzz (which doesn't exist as far as I know)...yet.

You should absolutely start one, Thabto. Check first with our leader to make sure there won't be a copyright infraction, but I think you would be providing a great service to the blimp community.

(oh my god, I can hardly hold a straight face here...)

I'd love to be all cool and say something snarky but I'm a member of a "Weird Al Yankovic" fan group, follow the International Station Wagon Club on facebook and I married a man who can speak Klingon so...blimps are cool...

We get blimps of all varieties (sorry, I don't know the make and model of them) here in Columbus all the time for OSU games and various events. They moor (is that correct?) at Don Scott Field and it's very impressive to see one on the ground like that.

One summer day when I was a kid I was in the house and was drawn outside by a strange noise, what sounded like a whirring that kept getting louder. I looked all around the back yard finding nothing, but the noise got even louder. Finally I turned around and looked up and about fell over backwards when I saw the tip of the Goodyear blimp come past our roof to fly right over our house. It was flying REALLY low, like scary low, and I was afraid it was in trouble and was trying to land on the golf course behind us. (It was like that scene in Star Wars where the star ship appears and just gets larger and larger, but this thing filled the sky not the screen.) It didn't land, but continued it's low flight till it disappeared on the horizon.

Now that I think about it, we were about five miles (as the blimp flies) from Don Scott so maybe it was heading there. I will never forget that day, though.

I don't know many blimp facts, but I remember seeing an article all about what it's like to be a pilot. They only fly about 60 mph, so its no faster than driving someplace, (and parking's a bitch). They also use the interstate system for travel from city to city, but in the air rather than on the pavement.

Brian, thanks for being a good sport. If and when BlimpBuzz gets off the ground (see what I did there?...) let me know. I won't have much to contribute, but at the very least I'll be a lurker.

Just one more blimpy post; Tuesday 7:45pm after departing CP, headed east on rt. 2 from Rye Beach, spotted a blimp about 10 miles east\southeast. I don't know if it ever came near CP.

The Goodyear Blimp just flew over the park. I'll share my pics when I get home. I'm so happy right now! :D

I saw it when I was on Magnum XL-200. and in line for TTD. It's larger than I expected.

codeGR said:
I saw it when I was on Magnum XL-200. and in line for TTD. It's larger than I expected.

Yeah, I saw it on that bridge in frontier town in between Maverick and SRF.

It was probably on its way back to Akron from the football game in Michigan yesterday. I think it did about 3 circles of the park today.