After waiting 8 minutes between Cedar Downs cycles at the park this year, I was about ready to bail.

Looks like they topped off the Wild Mouse lift hill today. Do they not do the flag thing anymore, or is it not a big enough coaster to warrant it?

Actually, I wouldn’t be surprised to learn that the track is completed this week. Perhaps the relatively short construction timeframe is cause for no flag? Also, it is pretty short who would see it? Furthermore, it looks as it the lift peak is flanked with (decorative?) flags on each side.

Yep, that was the last of it. They just posted it was complete on their twitter. 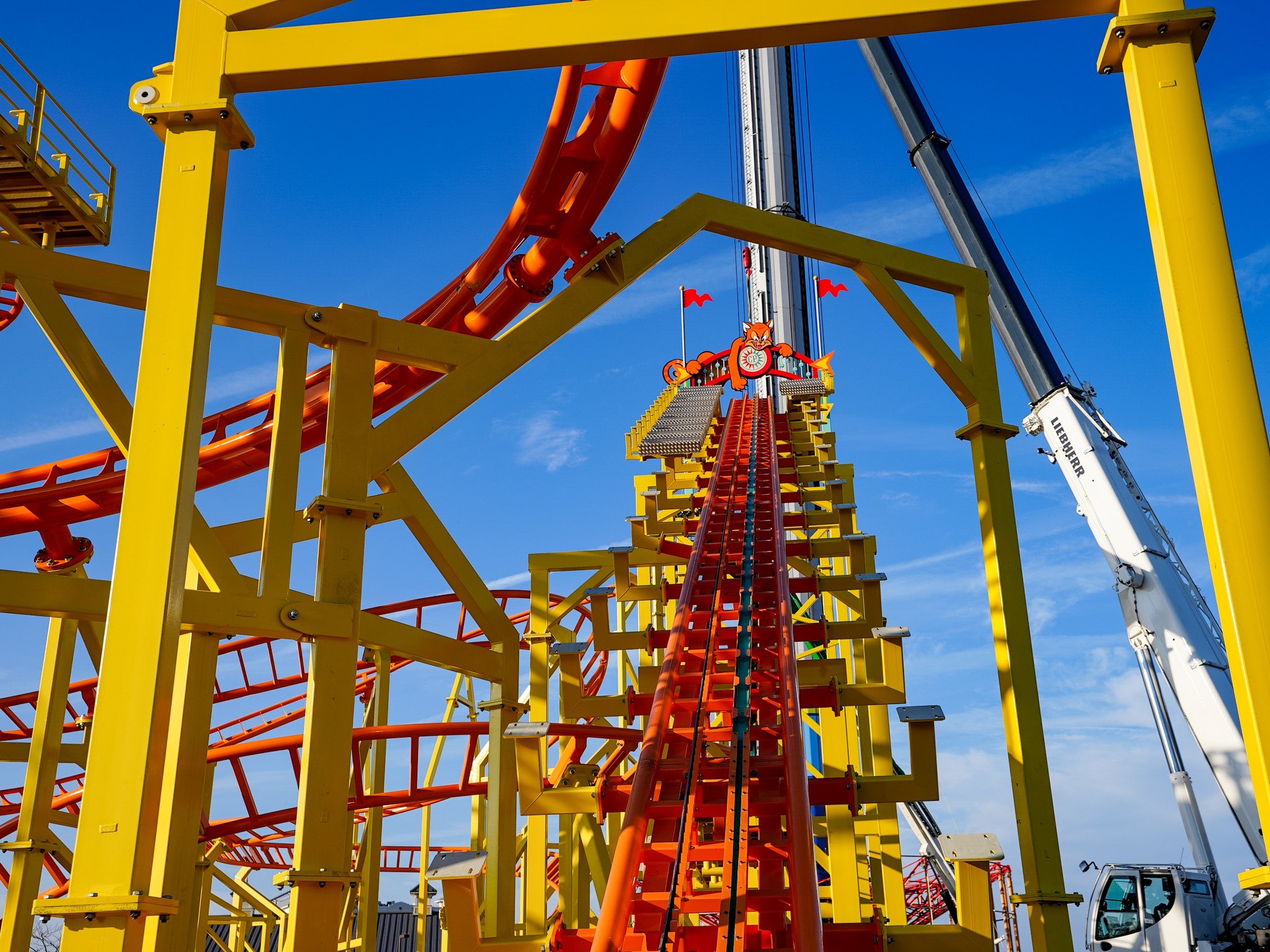 The Wildcat reference and the old CP logo are a great touch!

I can't wait to see the final product with the whole midway.

that would be great if in the future the park installs the rebirth version of the Wildcat.

watching some old CP videos lately and it seems that near that old Wild Mouse was a similar ride called the scant? Scat? (How’d we get here what am I asking?!) certainly room for two little/similar coasters at the Point.

Scamper. It was the “other” mouse version that was popular in the 50’s/ 60’s and was made by Mack. (The current Mack steel Mice that appear everywhere these days are similar in layout). Scamper was at the end of the Funway, about where Matterhorn was most recently located. It was removed when the original Calypso was reimagined into Tiki Twirl and took its spot. ‘69 was the last season for Scamper.
CP’s Wild Mouse was a Schiff ride and it was around where Raptor’s big loop is. Maybe slightly south. There was a season or two when Wild Mouse and Scamper operated simultaneously. They were the only coasters at the Point for years until Blue Streak came along to close that gap.
Broadway Trip was another portable mouse style coaster that ran at CP for a season. It had a tented, “indoor” section. I’m lucky that I got to ride all three.

You know what other ride type is classic to a boardwalk and would fit right in?? A dark ride!!

I love dark rides and the Point is lacking. Although, they make great strides for Halloweekends and I can’t help but wonder if that’s the very reason why permanent dark rides aren’t installed?

I think there are a couple of problems with dark rides these days. One applies particularly to CP, and that’s the space they require. They use a lot of room and space like that might be put to better use. I think parks Iike Knott’s and Kennywood that have buildings with second floor access can at least get a dark ride up and out of the way. I thought about the haunt buildings that CP has constructed around the park and that’s an option, but they are relatively small structures. A walk-thru with long, narrow winding corridors takes up a lot less space than a dark ride that needs room for track, cars, and scenery. Plus the haunt buildings serve as warehouse space during summer months. (I realize the Coliseum ballroom fits a couple of those requirements, but I think to ruin that structure for a dark ride would be a crime)
Secondly, I think dark rides have a relatively short shelf life. Audiences these days have shorter attention spans and dark ride story lines and effects become tired rather quickly. Even Disney and Universal have had to remodel or completely replace attractions in order to stay current.
I don’t get the yearning for a return of CP’s Pirate Ride. It was actually a pretty bad ride, with a story and effects that by today’s standards would be laughable (for the wrong reasons). I’m not sure how to make it better without “Disney money” behind it.
I think the best bang for the buck would be a water ride, like a flume, with a mountain or cave theme. At least there would be water ride action to compliment any scenery and keep guests interested visit after visit.

I think it is common behavior for people to yearn, or reflect on things or experiences from their pasts as if they were better or had more quality than present times. I belong to a few sports Facebook groups that constantly have people extolling the virtues of this player or that player from the past as though they were "the greatest ever". Or commenting on a picture from a random 60's NFL game calling it "real football". I'm sure 30 years from now it will be much of the same about present times and the rides lineup at CP.

I am old enough to have ridden both Pirate Ride & Earthquake at CP. Although I wouldn't mind having that type of ride available, I must say that as a pre-teen back then I wasn't overly thrilled about going on each. Kings Island has that Boo Blasters on Boo Hill that at least has the blaster guns which sometimes operate.

I just came back from Gatlinburg TN where, as I was walking along the main drag noticed an "Earthquake" ride. Has anyone here been on it and is it a duplicate of the former CP ride? We didn't ride it.

I would have to disagree. I think the whole feeling of the boardwalk is just a fun chill beach area to give a different vibe than the high intensity thrill park.

Even a total remake of the old pirate ride would be a success as it’s just a fun break from everything else. It doesn’t have to take up a ton of room or be Disney quality. Old fashion cars, sky ride, etc. could all be called boring, but tons of people love them just to break things up.

jimmyburke, that Earthquake “ride” is horrible. Find it on YouTube.

It’s more of a bad simulator, not a ride-thru dark ride.

Earthquake fit in what is now Snoopy Boutique (is it still that?). Pirate Ride seemed bigger, but having walked a haunt in that building with the lights on, it wasn't large either. But yeah, Holiday World area stashed their ride on top of offices and an employee break area.

Cedar Point actually has a great spot to build a dark ride on the main midway: above the games building. The biggest issue with that (besides the fact that the best way to do it would be to completely rebuild that building) might be getting it up high enough to still allow truck access to the receiving courtyard and warehouse in the middle of that space. Allow me to direct your attention to the yellow shaded area-- 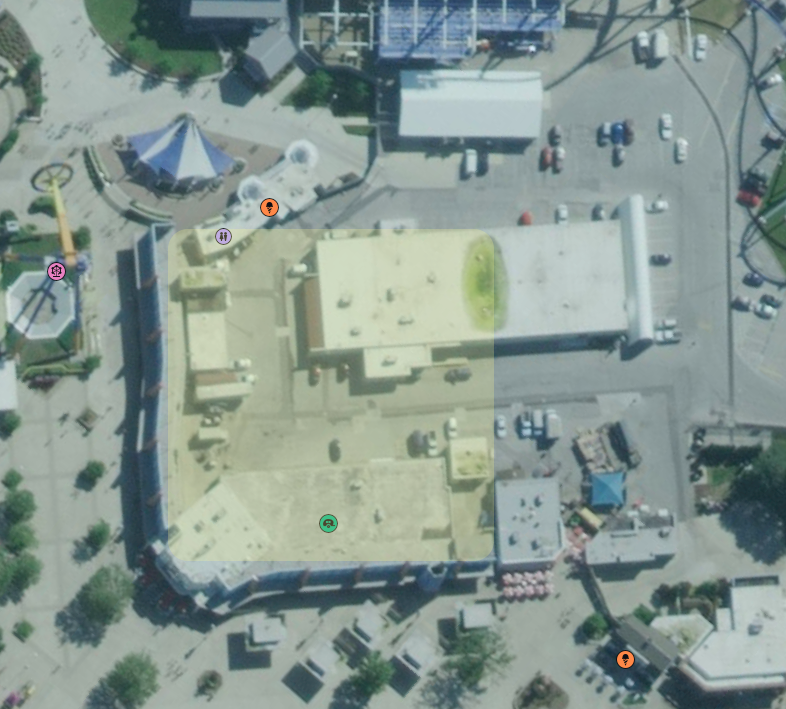 Although knocking all of the structures there down and rebuilding would offer a unique opportunity to re-arrange that space. That would actually not be entirely unlike what Enchanted Forest did, except they were able to take advantage of the steep hill at the front of the park to allow midway-level access to the second-floor ride. Here, the entrance would probably be through what is now one of the midway games and up a 1:12 ramp to the boarding area, then stairs back down for the exit, or a parallel ramp. Obviously the limits of the dark ride building could be adjusted. There is quite a lot of space there which is presently "outside" the park, and offers an opportunity for a rather large show building without looking like a rather large show building.

Even a total remake of the old pirate ride would be a success as it’s just a fun break from everything else.

As an ardent fan and frequent patron of Pirate Ride in the 80's, I couldn't disagree more. Not only because, as others have said, we're viewing it through rose colored glasses, but also back then there was far less competition in the form of other attractions in the park. Not to say the park didn't have a lot to offer back then, but the breadth of attractions today is massive compared to Pirate Rides' heyday.

I wouldn’t mind a flume like water ride with a dark ride section. I always liked the idea of water surrounding the teenager-tempting flammables. (Although we’re much less likely to carry forms or ignition these days). the feature is as old as amusement parks themselves.

Earthquake fit in what is now Snoopy Boutique (is it still that?).

I think it still is. I forgot about earthquake! Does anyone remember the fun house or as I used to call it "The Upside Down House". That was over by where the Giant Wheel is now wasn't it?

Sure do. The Upside Down Fun House was along the lake between Oceana aquarium and the beach bath house. When it was removed after the 1981 season Kid Arthur’s Court play area took its place.