So here’s my experience. I was in line with friends without my cellphone and we were inside the “tunnel” part of the line. As soon as the train came up into the final brake run, there was a HUGE crashing noise and a bunch of screaming. I saw a sensor from the ride drop to the ground. Everyone instantly started getting out of the line. I walked up further in the line and there was a broken wheel on the ground. It must’ve been pretty heavy and came in with velocity because it dug into the dirt a little. If that thing flew off 2 feet further, it could’ve seriously hurt someone. After I left the line I walked over to the station and the train was still in the brake run. Everyone seemed to be calm and safe at that point. The whole situation just scared the crap out of everyone in line and on the ride when it first happened. Surprisingly, a ride op said it might reopen later today, but I highly doubt it. Not 100% sure but I think of one sensor goes down, the whole ride goes down.

So it sounds like one of the brake run wheels then, right? Not a wheel from the train? Crazy. 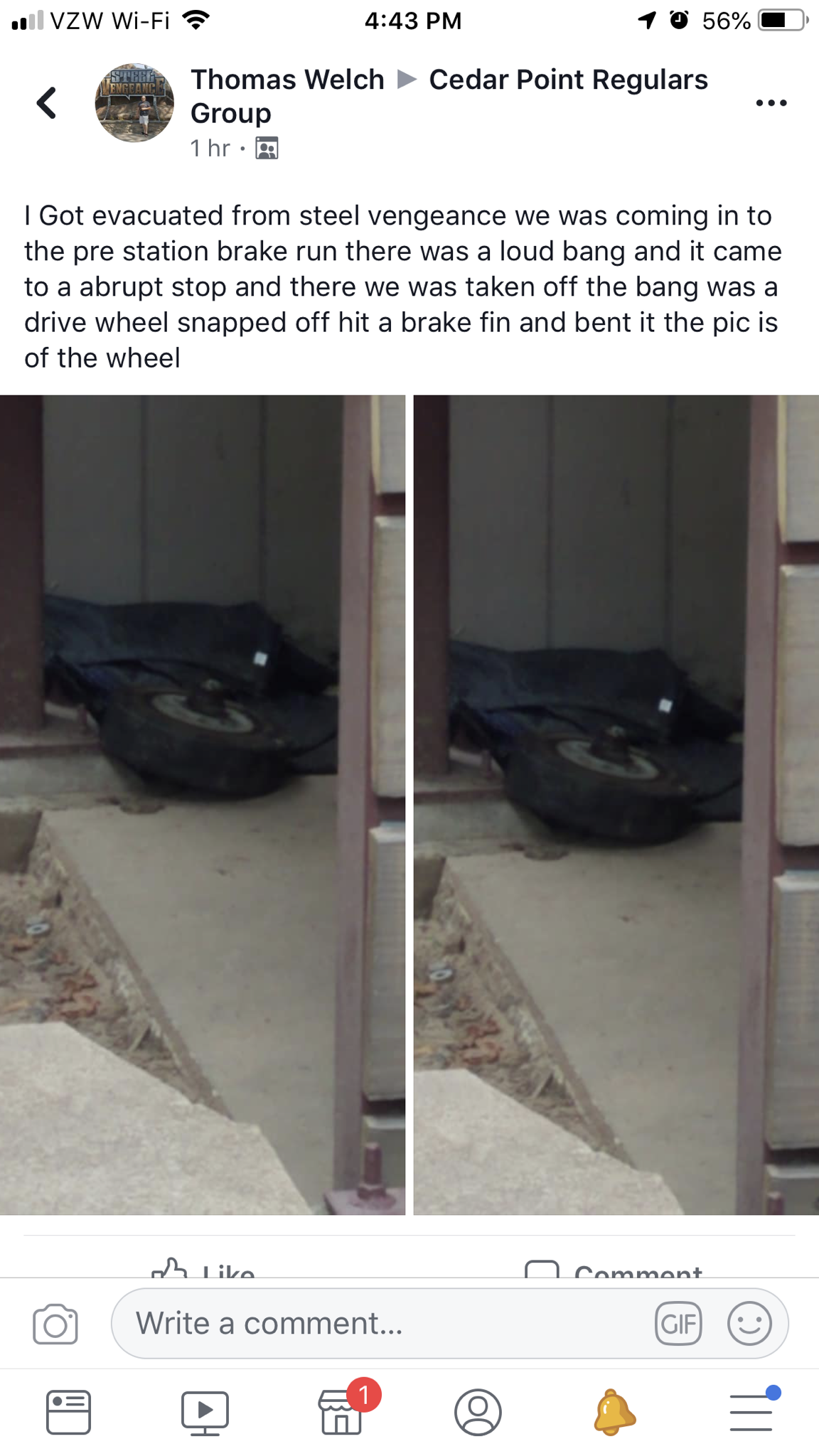 You know, I didn’t even think of it being a brake run wheel. I thought it looked strange. That makes a lot more sense.

The only thing clear to me is that Thomas Welch needs to go to English class.

Well, this is awful. No one hurt, thankfully, and now what are they going to do? Repair it, obviously, but what’s up with these mishaps?

For lack of a better term, yes. “Accident” carries a different connotation for me, but whatever. This is certainly serious and bad news for this ride. Thankfully no one was injured.

At least he spelled brake correctly!

We were there yesterday and the park is definitely the busiest I have seen on a weekday all season. Very unfortunate for the park especially with TTD and MF acting cantankerous. Sure hope they can get it back up quickly but looks serious enough the investigation could take awhile.

At least he spelled brake correctly!

Now we know what happens when the break brakes.

Oh my. I'm honestly freaked out about how many incidents are going on around the ride. I hope they don't get rid of it. I came across the article shared by Pointbuzz on facebook, and one comment said that the ride was being haunted by the ghost of mean streak.

LOL, ghost of Mean Streak is pretty funny. Anyway, I'm pretty sure the ride opened again later Friday, didn't go over there to look but the CP app said the wait was 1.5 hours at around 11:30pm. The app previously said it was closed so I do believe that it was running again Friday.

We saw it running from Perimeter Rd. as we were leaving around 11:45pm.

Started testing at 11pm and reopened at 11:30pm. Line was around 20 minutes, and fastlane was a walk-on. Park wasn't super busy during the day (at least by Summer Friday standards) ,and was absolutely dead by 11.

Kudos to them getting it open in the last half hour. Most other parks would have thrown in the towel for the day.

PS- This was not the first CP coaster which "throwed a wheel" during its inaugural season. At least this one wasn't a giant dragster slick!

This ride is hitting the brake run way too hard. By now it should be clear that the only reasonable solution is a 4th lap.

Say NO to Maverick!

SV listed as early entry ride this AM, we shall see. Despite season pass and Fastlane, the wife and kids still want to do the running of the bulls.

This ride is hitting the brake run way too hard. By now it should be clear that the only reasonable solution is a 4th lap.