I don't know why I'm having such a hard time picturing the area you're talking about, Brandon.

I've got news for you, not every ride in the park is ADA compliant.

Right, anything built prior to ADA rules doesn't have to meet ADA requirements. But anything built since then does, at least to my knowledge. Heck, even some older rides (Gemini, Iron Dragon, etc.) have been retrofitted with elevators in order to comply, if not because it's legally required, then because CP is in the business of serving guests.

I don't know why I'm having such a hard time picturing the area you're talking about, Brandon.

If you're referring to the Island side, see below. That's the new, current bridge taking you from the mainland near StR's station to the island (ignore the yellow arrow, that's pointing to StR's old bridge for employee access to the island).

On the island side of that new bridge is a huge swath of concrete, where you can go left to meander around Snake River Swamp, straight to take the rafts across, or right to take the bouncy bridge or Cascade Crossing. In any case, the entire shoreline is already pretty well spoken for. All this to say I'm curious to see where they'll fit a ~130 foot ramp on the island, even if they manage to squeeze one in on the mainland. 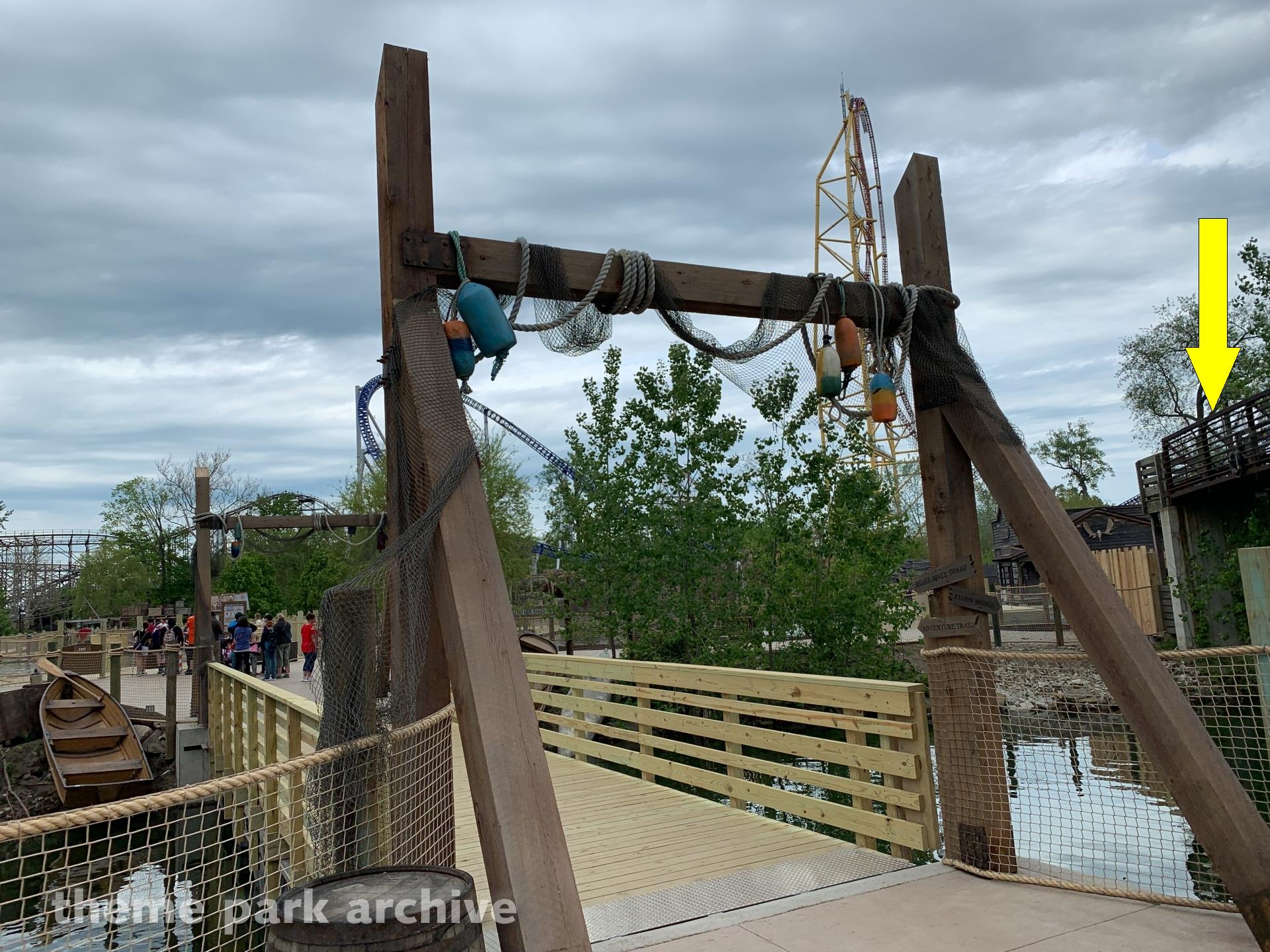 I'm going to solve this once and for all with the only logical explanation of most likely future plans of getting to Forbidden Frontier island with regards to Snake River Expedition. **This gets you the ADA compliance and solves the problem of the ramp leading to the island. Keep in mind all the while, the boat is going in a counter clockwise fashion around the island.

Here you go.... Look at the google overhead view (4 posts above this). We know that the old PWE station which will be used for SRE is right underneath the Charlie Browns cookout wording (take out the ramp under, this is the 1st dock site). The boat is traveling counter clockwise around the island to the site of the (NEW for 2019) ramp in the above picture -right above the Shoot the Rapids wording (this will be the 2nd dock site for dropping off the bounty AND get ready for this....to drop off the passengers on FF island and also to board them again). That newer ramp in the above pic is going to be TAKEN OUT. ,, The boat then continues to travel counter clockwise...All the while returning to the original station. Yes the passengers and ADA Wheelchair access getting to Final Frontier will now be using the boats. No more ramps from Frontier Trail for the GP, period. Two birds, one stone. It all makes sense. The yellow arrow bridge (Above pic) that's been there for 10 years will continue to be used for employee access. Drops mic.

In best Darth Vader voice: "You know it to be true". Luke: NOOOOoooooooooooo. LMAO!

You had me going at first. :-D

Interesting theory but I have a couple of questions.

I am assuming he was being jestful. But if not you've covered the issues with such an idea.

And if they were going to make boat access the only way to get there, one would think they'd use StR's station for the new boat ride. Because once you remove the Adventure Island bridge, cutting access from the mainland there, that Station and whole area serves no purpose. And you'd have to leave Frontier Trail and walk a half mile just to get to a place called... Forbidden Frontier.

Goes perfectly with the newly resurfaced and renamed Frontier Expressway.

Although a short SkyRide over to the Gemini Midway would be welcome. 750’ vs 1290’ for the current ride. Either of these paths wouldn’t impact MF. 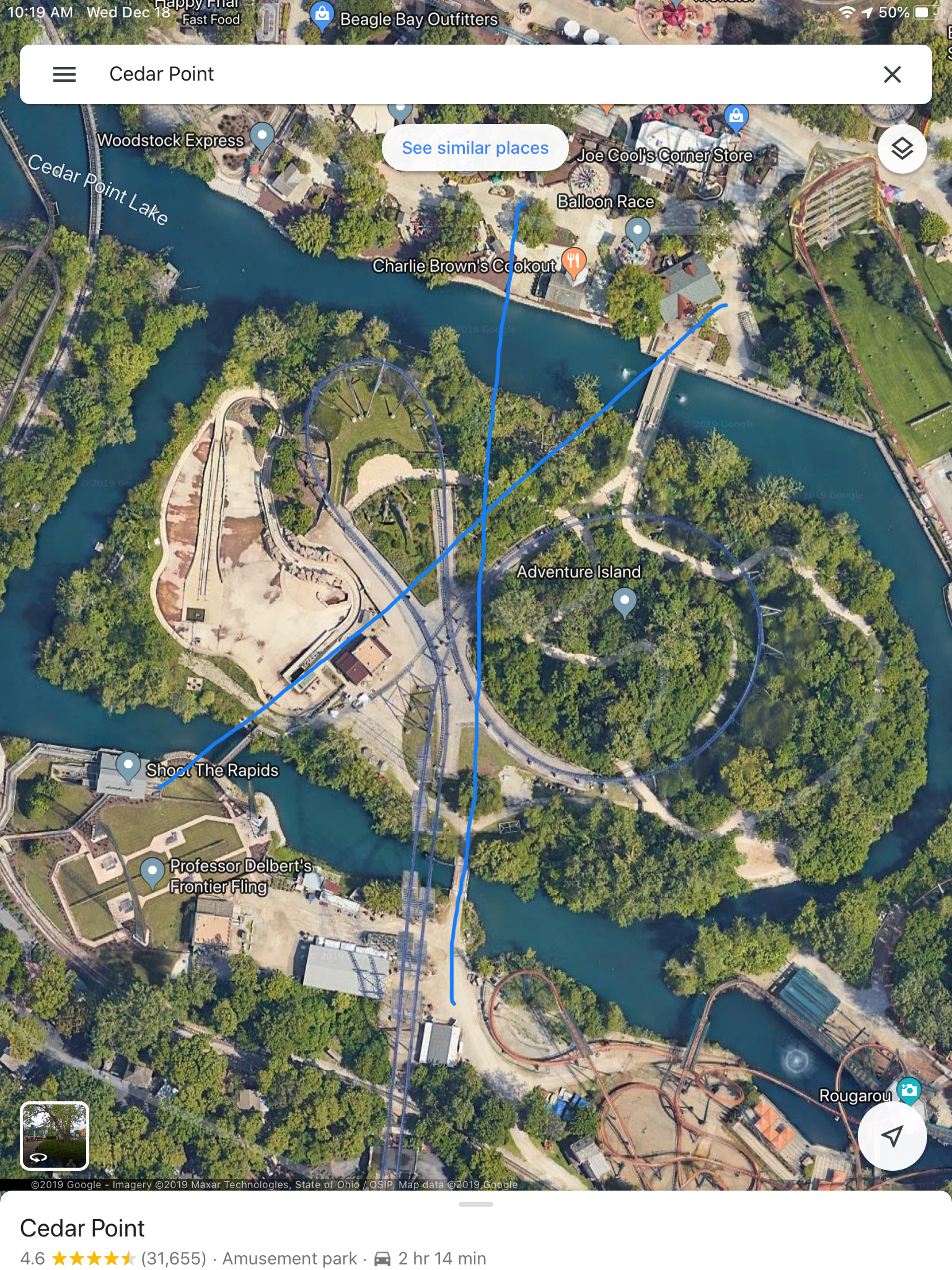 *Frontier Expressway is an extra charge attraction not included with admission.

Do we know for certain SNE is not an upcharge? 🤣

Hasn’t anyone been able to find out the answer? They had a live Q&A session on YouTube and Tony’s been to various holiday get together events with enthusiasts. Anybody ask?

Someone asked about bridges and island access during Great Ohio Coaster Club's holiday party and Tony explained that the park isn't ready to share details about those logistics yet. Shuttling guests to and from an island is an option that seems to work fine for Disney's Tom Sawyer Island. And since much of this latest announcement was based off of Disney ideas, maybe that's what will happen. It would be slightly odd to have Forbidden Frontier accessible only from the Camp Snoopy midway, but no more odd than it was having a frontier themed paddlewheel excursion leaving from that section of the park for 20 plus years. :)

The other thing Tony made clear during the holiday party Q & A was that SRE will not be Paddlewheel Excursion or Western Cruise. The attraction will have animatronics (we were shown concept art for two scenes) and some old favorites will return, but riders shouldn't expect a wise-cracking captain cranking out bad jokes during the entire ride.

...Tony explained that the park isn't ready to share details about those logistics yet.

This is the kind of response given when they know people are going to be displeased with the answer. Because it's not as if they don't know the answer.

So I will assume the boat ride will go clockwise from the dock down to the south side of the island, drop of the bounty, then return counterclockwise to the dock.

But it’s the exact same response when people will be astounded by the answer (SV stats, many hoped for 200’ but few really thought they would go there, I didn’t).

I also tend to agree that the simplest solution is most likely and that is a half circuit and call it a day. (KISS)

Then again, just maybe they will use unconventional technology that has billions of hours of proven success behind it.

Wow the size and scope of this bridge is going to be bigger than you think! Here is a live look at Cedar Point contractors starting work on the new bridge: 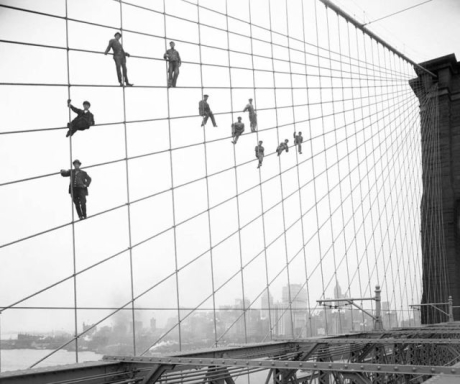 Can you zoom in on that 4'th guy on the right please? It looks like Spiderman.

As a former Jungle Cruise skipper (although the boats are on a track, so I guess it doesn’t count) I don’t see how they can do a 180 degree and back. The reversing, bottlenecking, and other boat traffic would be awful. Can it be done? Sure, but a 360 degree circle like it always was is going to be way more efficient.

Isn’t there an elevated walkway coming off the Forbidden Frontier entrance plaza? What if a path branched off of that to cross the lagoon?
Actually the simplest solution might be to replace the existing bridge with a bascule bridge of some kind. Maybe augment that with a non-accessible (in the ADA sense) climbing route similar to the Highground structure (but please, no net climbing...make it so us sandal-wearers can use it!) that might actually be the more popular route. Compare to the railroad crossing at Kings Island where you can either climb the stile, or wait for the train.

I thought of the bascule bridge (that leaned toward the island) originally when devising my theory above but because of cost constraints and having to have an employee man the dam thing constantly because of boat traffic, it doesn't seem likely.

Yes, CP has borrowed from Disney ideas (Matt Ouimet) the last few years , and like someone else mentioned; the Tom Sawyer Island idea (which I proposed) is already being done elsewhere. While my words seemed in jest, I was serious in my statement and do believe its the most practical idea for the new attraction.

...having to have an employee man the dam thing constantly because of boat traffic, it doesn't seem likely.

If a boat is the only way to get to the island, it stands to reason they're going to need more boats than they would otherwise. And probably more than 1 additional boat. Manned by employees.