So it sounded like they said the ride entrance would be the same place as the old ride. I'm guessing that refers to the deck/dock area where the paddlewheel boats launched -- to the left of Camp Snoopy and to the right of the TTD top hat?

I am probably more excited about this announcement than many of the recent coaster disclosures (with the exception of MF and SV).

Build an elevated bridge similar to a walkway that goes above a freeway..

This would require a LONG ramp to be ADA-compliant and stroller-friendly.

ADA compliance requires ramp slope be no steeper than 1:12, so if the bridge is to be set 10 feet above grade, the ramp needs to be 120 feet long, on both sides. Furthermore, there needs to be a 5' x 5' platform every 30 feet of ramp. So you would end up with either a straight ramp 135+ feet in length, or if set up in switchback configuration, a ramp area roughly the size of StR's station, on each side.

None of this to say this is impossible, just curious how they're going to deal with this.

The first thing that came to my mind is Millennium's platform. I am guessing that is probably close to 10' up in the air. Is the exit ramp 120' long? I know it doesn't have any platforms. Maybe the rules changed after it was built?

Pretty sure MF's exit has platforms, or at least one of them. You can see one in the pic below, beneath the first car. 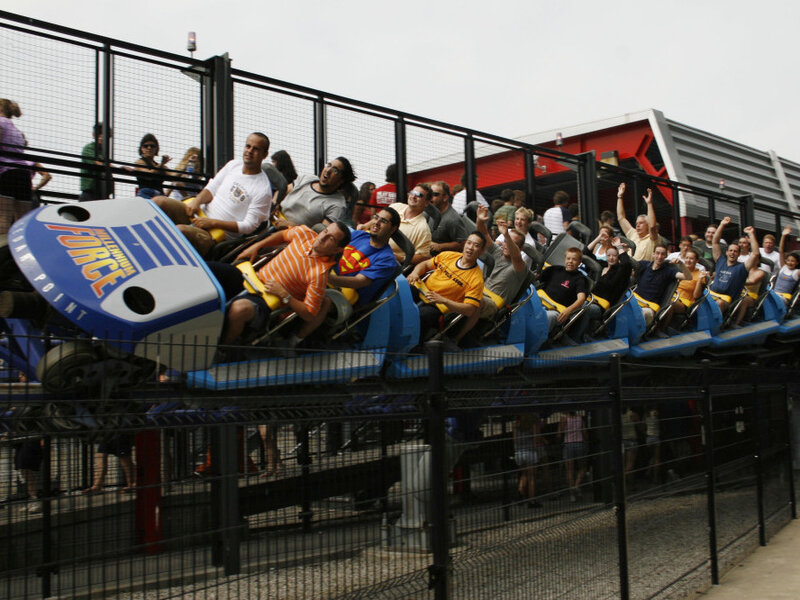 That is not a platform on the exit ramp - it is just the ramp. It is just one long continuous ramp from the exit platform down to grade.

It sure doesn't look like it to me. The yellow line follows the slope of the (near edge of the) ramp from the station, cyan is the flat part, and the red is the next ramp section. I honestly don't have a strong recollection either way, but based on this and other pictures, and ADA rules that I would imagine existed at the time... 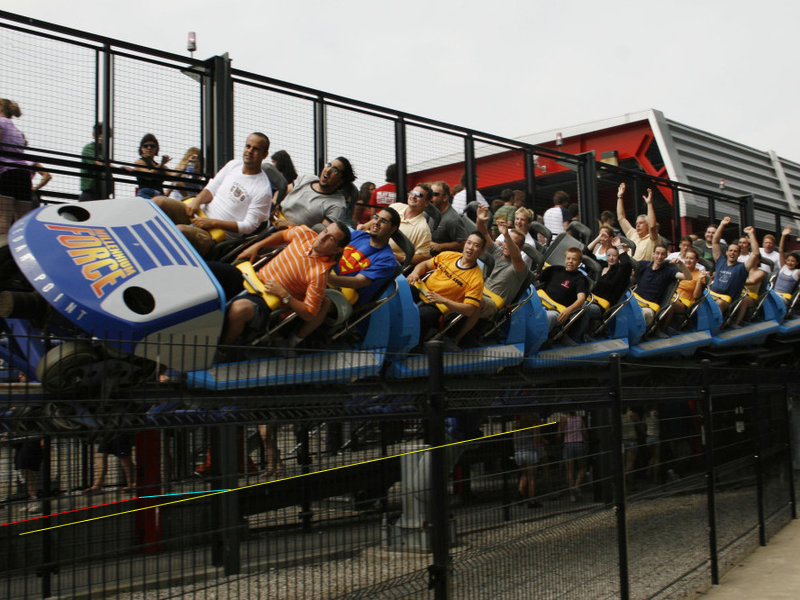 The last thing I am worried about Cedar Point being to pull off is a bridge over a small lagoon. They got this. Maybe they can use Frontier Fling to get wheelchairs across?

I thought of the ADA requirements a well as I wrote that. I definitely know it would not be the easiest thing to do. The ramps are definitely steeper on the freeway walks I eluded to, but I wonder if they could also use some sort of an elevator lift system as an alternative. If you look back over the years, they have changed the configurations or free space out in the lagoon and Millennium/Dino/Frontier Island quite a bit over the decades with the addition of ID and Millie as examples.

Be looking like Kentucky Kingdom there if they don’t watch it.
If the pathway is to be avoided I can see where a loop between there and the drop off point can be easily done. Two boats could pass on that waterway quite easily. Not to worry.

And there will be at least two boats if not more. The park used the term “boats” repeatedly during the announcement.

I think the bridge will be elevated and made ada compliant with ramps. A full circuit for this river adventure would make the most sense and maintain an air of mystery for the other boats.

...I wonder if they could also use some sort of an elevator lift system as an alternative.

True, but this elevator would need to have pretty high capacity in order to accommodate the numerous parents toting little ones in strollers, which is the target demographic for the main attraction on the island.

Looks like I have not consciously noticed that little flat spot before. If that classifies as a platform then so be it. In my mind a platform is a bump-out from the main walkway. Something that a wheel chair could be parked in without obstructing the walkway.

It is a platform in the sense that it's required for ADA compliance, so is a necessary part of any bridge for SRE.

Does anyone have an overhead shot of the hypothetical path we are talking about?

In other words, does anyone have more spare time than me right now?

Is there really more than one possible path unless they use duck boats?

Perhaps some scofflaw can launch a drone & provide footage.

I think I will just wait until opening day or there about to find out. Which brings to mind, last year when they opened Forbidden Frontier there was some sort of a Passholder Preview that featured free food samples! Wonder if something for Snake River Expedition will be made available for passholders (gold passholders excluded of course).

Hasn’t anyone been able to find out the answer? They had a live Q&A session on YouTube and Tony’s been to various holiday get together events with enthusiasts. Anybody ask?

The blue route seems more fun but a bit problematic overcoming some substantial obstacles, so my guess is something more like the yellow path. If there are other options I sure don’t see them. 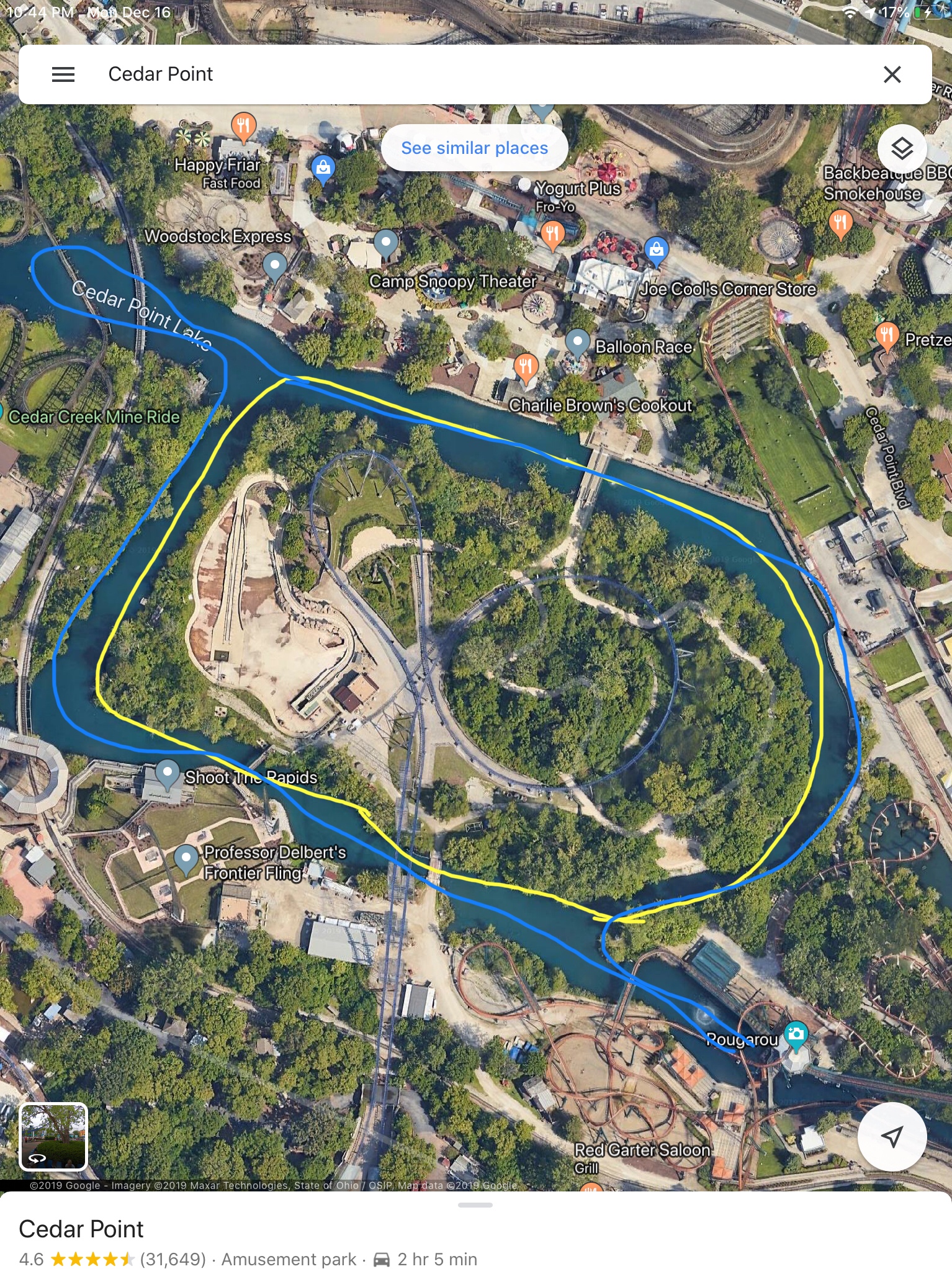 Yes for one thing the trestles for the railroad and CCMR are nowhere near tall enough to allow passage.

...my guess is something more like the yellow path.

Which seems the most obvious. And building an ADA ramp on the mainland wouldn't be too big a deal. It would probably require at least a partial demo of the StR station, since the ramp would need to begin at the red dot on the left below in order to get the bridge ~10 above grade. Or if they want to use the location of the StR access bridge (replacing it obviously), the ramp would need to begin at the green dot on the left.

But how do they solve the ramp issue on the island side? There's less available land there with the paths, etc., installed for FF. That whole shore is basically a concrete midway that branches off to the three paths. 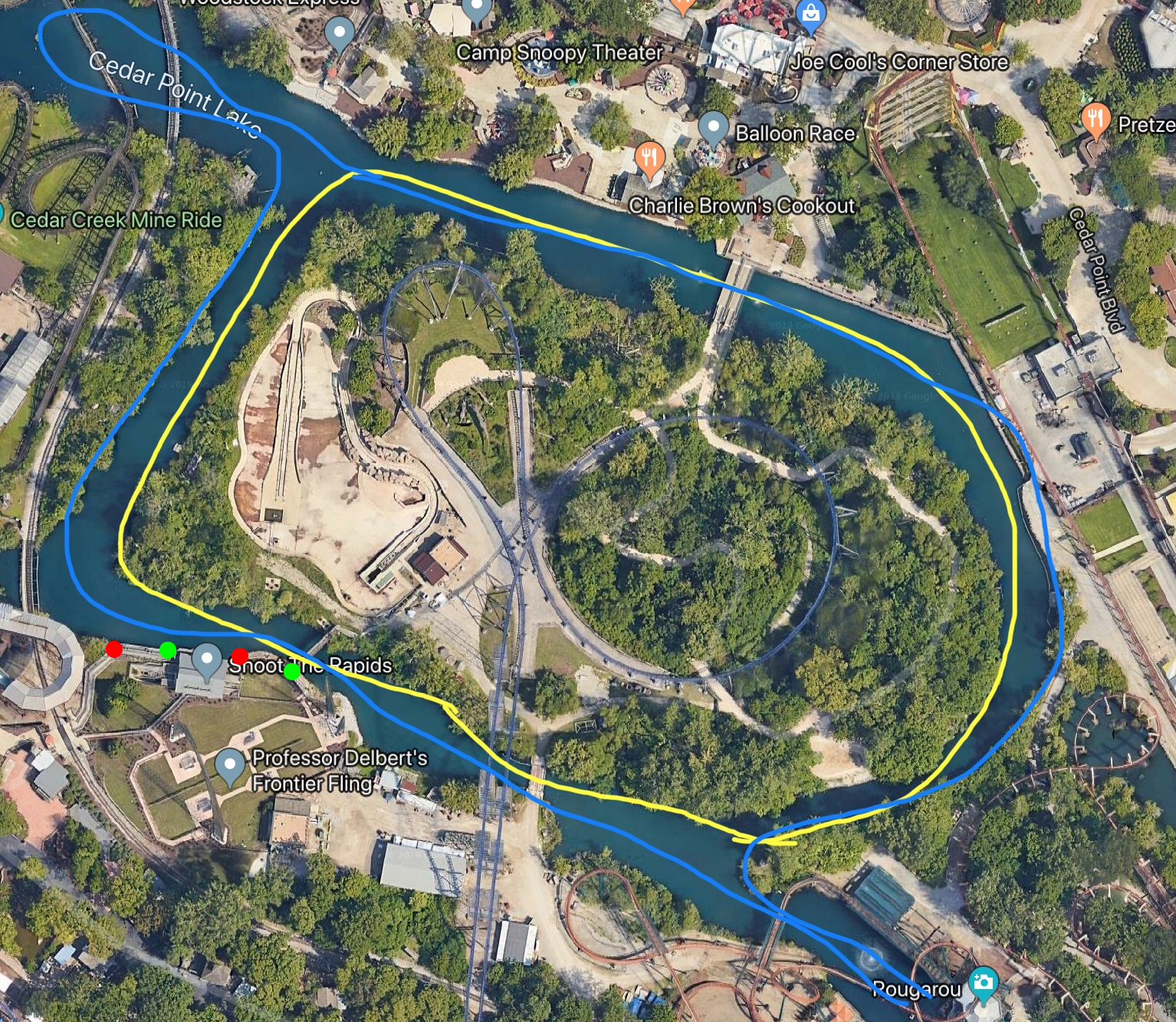