I sent you a message explaining my opinion. I’ll be curious to hear your thoughts.

I like the Grand Pavilion, and bringing back CP's past. I too hope that blends in with an actual boardwalk area, with a few food stands and plenty of viewing areas on the beach. Throw in a couple new flat rides. I personally would like to see a version of the pendulum flying carpet ride. It is a classic ride that would look great on a beach, and CP does not have one in their ride catalog. And, I may be dreaming, as I don't know if it was destroyed or sold, but bring back a classic....Schwabinchen.

Brandon, from Theme Park Predictions, posted on YouTube a video showing Cedar Point's application to the Sandusky Plan Commission for a Psycho Mouse roller coaster. It said "new construction." This was filed on June 30th. Question: could this be going next to the new Pavilion?

Brandon and many others got punk'd by a fake screenshot. Psycho Mouse isn't relocating to CP anytime soon (if at all, given the capacity concerns others have raised)

It must be so hard to be a conscientious influencer these days. There’s apparently a fine line between proper fact checking and being the first on YouTube with a scoop. It’s clearly not the job for me- I wouldn’t know a fake doc from a real one.

As much as I hate the idea of taking rumors as fact, I will admit the joke was on me and I fell hard for this one. My stupid opinions against and warnings about such a move couldn’t come fast enough, lol.

The .Schwabinchen still exists, it was bought by Stricker's Grove. When we will see it refurbished and back in service again, that's another story.

Such a bummer to have a classic in storage for years.

CHertling, thanks for the correction. Like RCMAC, I can't tell a fake document from a real one.

The reason that CP retired the .Schwabinchen was because the US office of Mack wasn't supporting the older rides anymore, something that the ones in Europe don't have to concern them selves with (they just call the factory direct). There are a lot of fifty plus year old Mack rides still on the European fair circuits.

So with California’s Great America closing; if Cedar Point we’re to get rid of Dragster after this season, plot twist…what about relocating Gold Striker to CP and putting it where dragster is now? It would be close to the woods, and if it goes back that far would be close to frontiertown for the western theme.

I think (especially after the Psycho Mouse lie) everyone needs to just pump the brakes when it comes to rides being relocated out of the park. It's not closing tomorrow, or next year, or probably the year after that.

That said, a couple things. 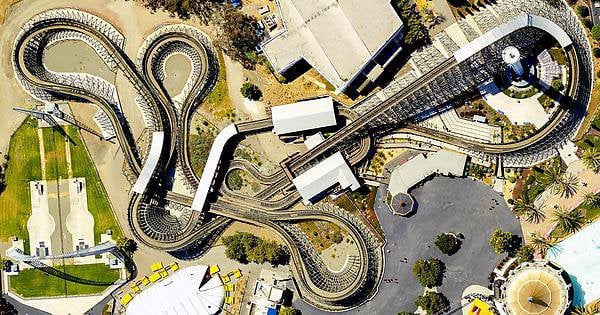 That would not fit in Dragster's footprint. Granted, I'm sure something could be tweaked, but TTD is a long, thin footprint.

Second, and maybe more importantly, I just don't see Cedar Point (in 2022) taking hand-me-downs from any park with regards to coasters. Much less a wooden coaster, which is not exactly cost-efficient when it comes to dismantling and rebuilding. This is why I thought the Psycho Mouse rumor (even though conceivable) seemed like a stretch. I just don't see CP being the recipient of leftovers.

I don’t see the previous Cedar Point management taking “hand-me-down” rides from other parks. Sadly, I don’t think current management holds the same regard for CP.

What possible precedent is there for the current management (which is quite literally a branch of the former) of Cedar Point seeing taking hand-me downs differently?

I can't remember any instance of Cedar Point being the recipient of a roller coaster (or any other ride) from another park in my lifetime.

What about the current management is different?

I think the concern about Cedar Point being de-emphasized might be grounded in some reality. The top dogs in current management don't come from Cedar Point/Cedar Fair heritage. They are old Paramount guys. Richard Zimmerman (CEO) was GM of Kings Dominion at the time of the acquisition in 2006. Tim Fisher (COO) was also a Paramount guy who either left or was let go in 2007 and by many accounts ran Village Roadshow into the ground with a cheap season pass program before returning. They were probably around and disagreed with Kinzel trying to apply the Cedar Point strategy to the Paramount parks. But in a way, I see them sort of trying to apply the Paramount model to CP now and I don't know if it will play out well.

If there was one thing that stuck out to me about the Paramount Parks pre Cedar Fair is that they installed a lot of gimmicky, cheaper, low capacity rides that weren't always well suited for the scale of the parks where they were located. Cedar Fair has largely corrected that at KI, Canada's Wonderland, Carowinds, and somewhat at Kings Dominion. I don't think putting a used Mouse at CP would serve much of any marketable purpose and the capacity would be terrible. I don't really see it happening, but who the heck knows with these dudes?

Having said all that, there probably is some desire that makes sense to end the pattern of building the biggest, baddest, record breaking ride at Cedar Point every other year as an ongoing strategy. Attendance is pretty much plateaued at around 3.5 million and isn't moved much by a huge new ride even though I think fans of the park have come to expect it. Having three less rides than last year is a bit of a bummer, but CP still has plenty to offer. I still think there are strides to be made in the "everyone can ride/experience together" area and I think they need to take a hard look at their operations policies/procedures because they've become rather mediocre in recent years, but I think the Farmhouse place they installed this year is a nice addition. I wouldn't mind one more kick ass food place on the beach. Beyond that, I think they have food covered. Hoping we'll all be happy with whatever fills the empty area over there.

All the carousels, and Cedar Downs came from closed amusement parks, as did the dark rides (which are no longer there). For the most part the park has bought nothing but new rides (some prototype ones at that) since the late 1970's

What about the current management? They are not obsessed with the one upmanship that dominated the financial decisions of the past. I've said it before, but "the coaster wars are over." The focus now is on developing a total resort experience, not how many roller coasters you can cram onto the peninsula.

I guess I should clarify; I wasn't talking about Cedar Fair, but Cedar Point specifically. If you don't know McClure (now Cedar Fair), the dude lives and breathes Cedar Point, and is all about the park's past, present, and future. My point was, this torch was intentionally passed to Boldman, who is just as much (if not more so....in fact I would add that as a clarifier) passionate about the place.

I see zero evidence of the chain changing its view of Cedar Point as the "crown jewel" of the portfolio.

If anything, this new "Grand Pavilion" is an exercise in how much the current management truly gets the importance of the park's rich history, and how vital emphasizing that is to the park's future.

I think anyone expecting any kind of “record breaking” rollercoaster is going to be severely disappointed over the next few years. Or they just haven’t been paying attention. Frankly I think even expecting something beyond a new flat or two over the next few seasons is probably expecting too much. Let’s not forget that TTD may be facing the chopping block. A demo of that nature would be considerably expensive; an expense I doubt very seriously the park or CF planned for.

I think the concern about Cedar Point being de-emphasized might be grounded in some reality. The top dogs in current management don't come from Cedar Point/Cedar Fair heritage. They are old Paramount guys. Richard Zimmerman (CEO)...

Since Zimmerman took over in January 2018 (just before CP opened the tallest, fastest, steepest, longest hybrid coaster on Earth, it bears pointing out), CF purchased Sawmill Creek in 2019 to the tune of approximately 1 Mystic Timbers, then spent another 1.3 Orions renovating it and Castaway Bay. Then in 2019 announced they were spending 0.95 Orions on expanding Cedar Point Sports Center.

So, while folks around here may be sad that there haven't been a sufficient number of shiny new rolly coasters built recently, the fact of the matter is that CF has spent the equivalent of more than 4 roller coasters in the last 5 years (3 in 4 years under Zimmerman), one of which was during a global pandemic. And that's not even counting Forbidden Frontier, Snake River Expedition, Farmhouse Grill, and of course the upcoming Grand Pavilion.

There is plenty to criticize CF/CP management for, but there is simply no evidence that CP has been "de-emphasized" in terms of investment.