With construction well underway and more teases coming from the park, let's start a thread dedicated to what's coming to the shores of CP in 2023.

How "grand" will the changes be?

Is this a one-year plan, or the start of something bigger?

And most importantly, will there be perch? 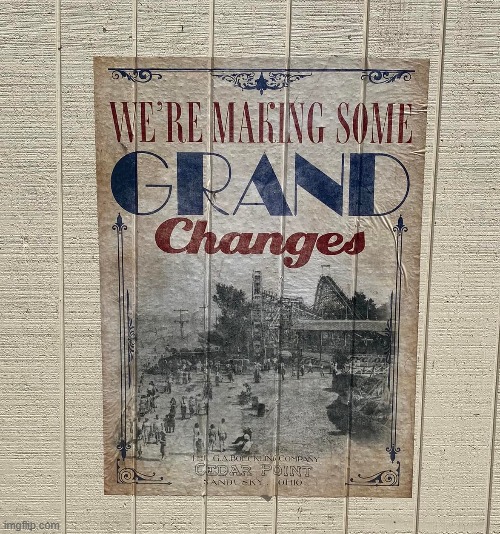 I would imagine it's going to be a multi-year project, affecting the area from Flying Ace Balloon Race, through Oceana's site and all the way 'round to the main midway where the 150th bricks are. That would cover a whole lot of stuff that hasn't been updated in a long while. I feel like the only thing that won't be touched would be MaXair.

"Ride the Windseeker" and "More fun fun fun with Troika Troika Troika in 2023" are the ones that have my attention the most. It makes it sound as if windseekers days are numbered, and maybe a new flat or 2. Or maybe they just want you to ride windseeker to check out construction.

IN FIRST WITH BOARDWALK MIDWAY!!!1!!

Do I gather there are multiple posters with different messages on the construction wall? Is anyone able to post photos of them please?
Lately CP has done such a good job with stuff like this, and I’m mainly thinking back to the advance stuff and teasers regarding Frontiertown.

Planned on visiting later tonight, and I was curious myself. So I was about to volunteer, but it looks like they're posted here already:

It just oddly disappeared completely from the park this year after previously being available in three locations; 1) Mrs. Keats, now serving Chipotle, 2) BackStreet BBQ, and 3) Lakeside (or whatever that place that is never open near Gatekeeper is called).

Maybe seafood just isn't something a lot of people think about when they visit CP (or maybe not enough to make it worth it financially). I just can't think of one food item more synonymous with Lake Erie.

Fun Fishy Fact: My favorite, favorite thing to order at MELT is called the "Lake Erie Monster". It's literally a mountain of perfectly made perch in a sandwich.

Guess which MELT it's not available at? Yep. Cedar Point's.

Based on those posters, this feels like something similar to what Knott's did with their boardwalk area.


Now why would they not be able to do so legally?

Due to trademark? And I believe Fascination is no longer in business. Or at least there are no manufacturers of tables and equipment, which is why the game has declined over the years. The technology is outdated. It’s also labor intensive. Unless they’re able to rescue a parlor in its entirety, I’m afraid hope for a return to CP is lost.


I agree, which leads to the question; what about Giant Wheel & Tiki Twirl?

Oops, I just saw a Giant Wheel poster as well.

Probably not worth mentioning, but the picture on the windseeker poster is not of windseeker. It's of the old sea swing that currently has a float in the parade and is mentioned in the show. Wonder if they're hinting at anything there.

I personally am not reading too much into the specifics regarding the posters. Collectively they seem to all be saying the same thing - the park is improving the area in a way that celebrates their history of being a beach resort.

I also do not foresee WindSeeker going anywhere. The initial midway placement felt kind of forced, but I am sure they will correct that and it will be one of the anchors from that area.