A full tank a gas, half a pack of cigarettes, it’s dark and he is wearing sunglasses. He’s on a mission from God.

Me too. Sandusky to Mason (without) any stops should take about 4 hours going the speed limit.

I will not start ripping into other people because they don't share the same view. My strong opinion is what it is, you don't have to like it.

This is truly my first post here or at any coaster/park forum. I am a real person, with a real job, with a real platinum pass, and I spend real money at Cedar Fair parks. I posted because I feel strongly about the topic, not to start a pissing match. Isn't that what discussion forums are all about?

Discussion forums are also about pointing out the flaws in someone's argument. And your argument is absolutely filled with them.

Me too. Sandusky to Mason (without) any stops should take about 4 hours going the speed limit.

I can make it from Ann Arbor to Kings Island in 3.5, without stopping, going the speed limit. Idk where you come up with 4 from Sandusky. Maybe a hair over 3 hours.

Cargo Shorts, that is spot on. Thanks for the laugh this morning.

Because it can take that long depending on traffic. 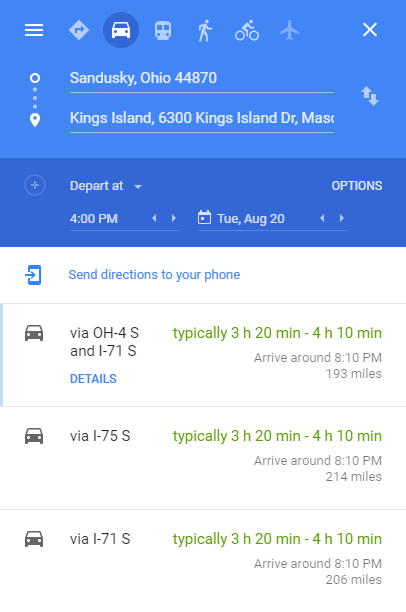 Yeah I think you can do it in 3 hours. (2.5 doesn't seem realistic.) but it would only take 4 if you are trying to get through Columbus at peak rush hour or something.

Sandusky to Columbus is 2 hours. No matter which way you try it, and believe me I have tried them all. From Columbus to Mason is a little under 1.5 hours. So really you are looking at 3.5 hrs, but I'll give you 3 hrs. As long as you don't get stuck behind a Semi or at some train tracks on Rt 4.

DRE420 - it's all two-lane "back roads" through towns from northeast Ohio to Southwest Ohio -- painfully slow. Your drive from Detroit to Mason is mostly I-75.

Yea, it is hard for me to get to CP from Cbus is less than 2.25. There is always something that is going to slow you down, train, farm equipment, a lot of small towns to pass through. I take the 71- Mansfield-13 route occasionally but that is rather convoluted and has more traffic.

Getting to KI the 71 construction has been a mess near Cbus for years and doesn’t look to get any better for a few more and 315 near OSU can be a mess right now as well. I don’t see doing it in much less than 3.5

Also getting from your parking spot to the gate with a full bladder is not recommended. :)

Calling GateKeeper Iron Dragon really belongs in the "crazy stuff you hear in line" thread lol. Enthusiast B&M haters who want every wood coaster to be El Toro and every steel coaster to be SkyRush are ridiculous.

It is "Just Coasting", not Just Coastin and no I did not make up a new account. It is not my father because he has passed away, as for my brothers, they are GP and go to Cedar Point once every 5 or 6 years.

Kakrunch does have a point, the only reason I have not said anything is that the higher ups have been stating that it was going to be a 2 year celebration. I am taking that meaning to be that hold on, don't get upset right away, we are doing something but it is so expensive it will be coming the in the second year. Kind of like saving up money to purchase a new car, do you want a K car or a Mustang.

If he wasn't informed of the 2 year plan then it is only logical to think like that.

As for the so called "River Expedition", why couldn't that mean a log flume?

Cedar Fair is making a large investment into Kings Island with Orion, they are going to hype that Giga to no end. They do not want to hype 2 big investment rides in the same year, it will dilute the product.

Either a GCI woodie maybe with inversions, maybe dueling {Cedar Point needs a good woodie.} -Or- A T-Rex Polar Coaster.

Since the GCI is way less money then I can see them going that way.

That goes under the lake...

Noticed most the other parks are expanding their Planet Snoopy. I could see River Expedition to be a log flume. They can't clone the one at KI but it would be a good addition to the park if they did something similar.

As far as the embarrassing state of Cedar Fair, well I can't wait to ride Orion. I'm also stoked about the future of a small investment I'd made about 15 years ago. I can wait a year for them to add to the best lineup of coasters in the world. But they own a lot of other parks that still don't have a Giga.

You just joined the premier CP enthusiast community. You are now among the most fervent and critical fans of one of the greatest amusement parks on the planet.

You have only one "first post" to make, and you choose to make an ass of yourself? Don't misunderstand, you are by no means the first to make such a predictable and hilariously-bad post. This was your high profile opportunity to make an informed, thoughtful critique. Not come across as a disgruntled 7 year old.

You had the opportunity to do something reasonable for your first post, and you failed miserably.

Hey, maybe for your second post you will whine about attractions being down for maintenance.

Aren't we a little sanctimonious?

Kakrunch, perhaps you should have spent time reading discussions on Cbuzz before signing up. It can be a tough room :-)

Nobody is disgruntled. But some people are commenting on the questionable conclusions of your post.

Cedar Point will be marketing the anniversary and having special events, and only park execs know what the following year will bring.

Cedar Point, like any amusement park, adds attractions to appeal to various segments of the market. Clearly CP felt that a water attraction would be a good fit. Not every addition can be a roller coaster, and anniversaries are promotional opportunities, not necessarily a reason to add a coaster.

I hope you've reached out to the park with your concerns. Posting on Cbuzz is fun, but concerns or problems should be presented to the park.