I’d always heard that they fabricated the heartline replacement ahead of time, and it was sitting there ready to go when Stengel told them to pull it.

There's literally nothing true about any part of that sentence.

I always suspected that the company line about too much stress on the trains was PR spin. I believe the primary reason it was removed is because it would've snapped your neck like a twig transitioning from the curve into the roll at that speed.

And it only took them 14 years to perfect that maneuver for Velocicoaster.

Where are Intamin tracks fabricated?

As I understand it, Intamin uses fabricators in countries that don't use a lot of vowels. I've heard that they have quite a lot done in the Czech Republic.

That said, what we know is that some 25' of track was "damaged". Who said it was serious damage? Damage in this case can be chipped paint, not necessarily anything structural.

^ It was described as impact damage. And to be honest at the speed of the train, I'm surprised it's not more than 25 feet. But a piece coming off a train at 100+ mph isn't going to cause just chipped paint.

2020TpForSale said:
I just don't see it reopening in time for next year, if at all... ....Every square inch of TTD will now be inspected with a fine tooth comb. That's not a process that happens overnight.

I would think the biggest obstacle to deal with would be the replacement track that is presumably needed, but if they get that into production now they could feasibly install it early next year I would think.

If the only portion that is damaged are track ties, an entirely new section of track might not be needed. I have see multiple track ties cut out and new ones welded into place overnight during the operating season before so it wouldn't be out of the question to do this. But even if a new section of track needed to be fabricated, I don't see why that can't be knocked out over the course of the winter. Especially since this section would be straight and flat.

^ I'll admit, 99.99 percent of y'all know more about coasters than I do. But if this is a failure of the bolt, wouldn't you think that other portions of TTD are held together by the same bolt? Wouldn't those bolts needs to be inspected too? Enlighten me. I won't be offended...honestly.

Not necessarily. The bolts in question might be used elsewhere on the train but outside of that I wouldn't imagine they were used for structural purposes on the track/structure. In the case that the bolt was the wrong type and only used on the trains, it would be replaced when the trains were stripped down in the winter anyway. This is of course if the problem is the bolt and whether or not that same wrong bolt was used elsewhere on the train/ride. If the correct type of bolt was used then that brings something different to the situation.

Unscientific wild speculation: Ride Man mentioned that the L shaped piece was a larger L shaped piece than was previously used as some sort of sensor plate. As it was a new addition to the ride, the maintenance team needed to fasten it in place in a manner they deemed appropriate for a piece that seemingly was to have no structural significance. Likely they used the existing threaded studs or bolts that lined up with the previous size piece. The nuts could have been the old ones or spare ones of a lesser grade, they will determine if that was the failure. Operation of the ride with the severe rattling after the down drop likely weakened the bolts/nuts to a point that the L piece then had enough "play" to actually come into contact with the track, and after 25' of contact snapped off as evidenced by it looking bent in the picture. As mentioned, the track may have some scraping or gouging. In my unscientific opinion the failure was a combination of the fasteners used to secure the L piece.

Macevehicz posted a pic over on CoasterBuzz that shows the part in question… Look just inside and above the wheel bogeys. Sure looks like what that guy was holding in the other picture.

I didn't realize this was my pic... I went back and cropped closer to the part in question, just for reference. 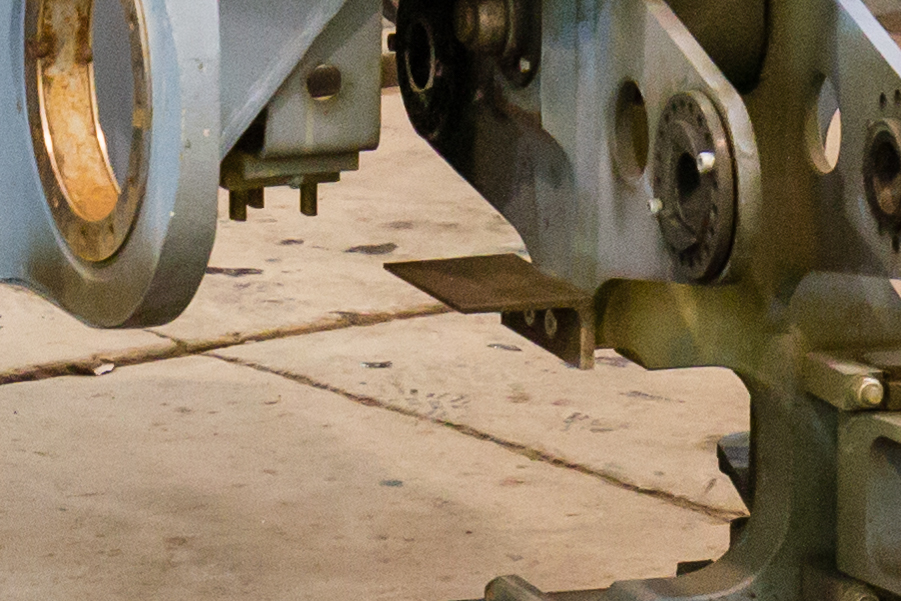 I am not certain that those are bolts holding the plate in place as it doesn't look like there is room on the backside to get a nut in there. It looks more likely that they are screws , and I bet they are countersunk to keep the head from sticking out and potentially catching on something.

If it is a screw that would explain why part of the "bolt" was still on the train - the head snapped off and the threaded shank stayed screwed in.

Another unscientific thought just occurred to me as I look at the picture from Steve in the above post. First, that looks very similar to the previously posted part. Second, instead of wondering whether that piece rattled loose or whatever failure, how about whether excessive rattling caused the track itself to develop a breach or burr that protruded enough to contact that L shaped plate on rip it off. If that piece is a sensor of some sort I assume it is positioned in very close proximity to the track.

The metal piece is not the sensor. The things with the square green heads mounted along the track are the actual sensors - they "sense" the metal plate as the train goes by. I don't think the sensors are located tight against the track, which would mean I don't think that the plate is real close to the track.

And I would think if the plate were to come into contact with the sensor that the plate would win that battle.

If the bracket was on the back of the train and not the front, and it caught a track tie, it would have separated behind the train as it bounced off into the queue. By the description in the state report, it sounds like it hit a series of ties over 25 feet before it finally came loose entirely. Knowing what the part looks like, I doubt very much that it ruined any of the track to the point it needed to be replaced.

Did the green train have a rollback immediately before the run when the bracket detached? I’ve heard that the end of the launch is where the collision with the track (also?) occurred.

You p-buzzers do realize that we (and the c-buzz crowd) are doing all the journalistic work for them, right?

I haven't got the slightest clue. I sold it to TMZ.