There’s nothing wrong with hoping the event is as good as the Gatekeeper media day was. And if it is, I’ll be thrilled! And if it isn’t what I expected I’ll tell management. 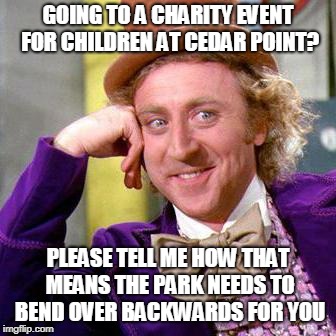 What do you expect it to be and why would it be anything like GK’s Media Day? I think what to expect is pretty well spelled out.
You should spend the time and then ask for your money back. See where that gets ya.

@Adam - because I’m a paying customer.

No. At this event you are not a paying customer of CP. You are there to donate $75 to charity and CP is donating their time and property to charity.

I guarantee this will not end well for you.

Coast, if I witness you yelling loudly, and you ruin it for the rest of us, I will ask you to meet me in the parking lot. Plain and simple, no joke.

I won’t be yelling. I didn’t mean loudly literally. I mean with such enthusiasm as to be heard by those in charge. And likely social media.

Playing devils advocate, for those who purchased a ticket and say that you do not expect something in return - why didn't you just donate your money to the charity without buying a ticket? Why did you donate via the first ride event where you do have an expectation of getting something in return rather than just making a donation and getting nothing in return (except for the tax benefit)?

CP takes $75 a day from thousands of people and does nothing other than open the door, why would your $75 “donation” deserve any preferential treatment or any swag over an actual paying customer?

I’m not sure why that should be a question, even for a devil’s advocate.

Speaking for myself, I make contributions to the charities of my choice throughout the year without the expectation of compensation other than the benefit to my community.
Would I consider Lebron’s foundation normally? I’d say probably not, simply because my contributions are usually on a very local level.

But fundraisers look for things to offer that encourage people to donate, it happens all the time. By partnering with CP they are able to reach a wider range of potential donors, it costs them nothing, and that’s not a bad thing. While I’m not in the Akron area and have no underserved kids, I do recognize the charity as a worthwhile one. That, combined with my interest in the new ride, makes it a win/win/win for all involved.

Edit:
I re-read your question and I don’t think anybody here that’s participating is expecting “nothing” in return. We are expecting only what’s promised. At my level I expect to have a special area to watch the ceremony, and to be ushered onto the ride ahead of everyone else. Afterwards I can join the line for re-rides, hang around Frontiertown, ride other rides that are open, eat some food, have a beer. And barring an unforeseen event like a thunderstorm, that will happen. And if it is a rainout I’ll have to settle for the mere consolation that I made a donation to a worthy cause.
I certainly didn’t donate my money expecting a day like Gatekeeper’s media day, and I think that was the point some were trying to make.

coast said:
Tickets purchased. Now for this event, being $75 a pop for a ticket, I will be holding the park to a high standard which they will need to rise to fill. I'm thinking GateKeeper media day style of expectations. And if they fail to live up to the expectations, they will indeed hear about it...loudly.

Barf, you are the poster child of what is wrong with enthusiast events. No consideration even given that this is all about the charity.

I won’t be yelling. I didn’t mean loudly literally. I mean with such enthusiasm as to be heard by those in charge.

Nice backpedaling. But your customer powers are weak.

Coast, the event will never live up to your expectations or perceived high standards. Ask for a refund now, stay home and avoid emparrasing the community.

coast said:
I won’t be yelling. I didn’t mean loudly literally. I mean with such enthusiasm as to be heard by those in charge. And likely social media.

Which in turn, can still ruin it for everyone. In fact, you may be doing damage as we speak for even spouting off such garbage on a forum where Tony is known to lurk.

I am a attention whore!

Coast - in the world of hospitality and customer service you are known simply as "that entitled ***hole" to all of us in the office at the end of the night talking about the day.

I could be wrong. But I think Coast is just trolling the "Let's bash the enthusiasts crowd", by acting just like the stereotype and then some.

However if you are serious Coast then I hope that guy meets ya in the parking lot.

Yeah I was thinking the same thing. There’s no way someone can be THAT angry as often as Coast is.

I went to the Valravn first rider benefit and it was really nicely done. Was able to ride Valravn 9 times (I was in the second to last group to be let in the area so didn't get as many rides as other people but that didn't bother my group at all). The food spread was excellent. Valravn was the only ride we were allowed on but everyone that was there was having a good time from what I could tell. With this first rider benefit, Maverick should be open as well which should create short lines for both rides. I am really looking forward to this event. Coast, you should have no problem enjoying yourself at this first rider benefit. If not then you only have yourself to blame, not the park.

I’ve been here a few years now, hardly as long as some but long enough to get to know the regulars here a little bit. I’ve agreed with some, disagreed with others, but there are very few I’ve outright disliked.

Congratulations coast- for the monumental douchebaggery of going to a charity event asking what’s in it for you and threatening to throw a hissy fit if you aren’t catered to to your exact specifications... YOU JUST MADE THE LIST.