jwalk03 said:
I seriously doubt they would demolish the Coliseum since its on the National Register of Historic Places.

I believe RideMan is talking about the Midway Games area and not the Coliseum that houses the arcade, operations offices, ballroom and wardrobe.

I was, indeed. In fact this is the area in question: 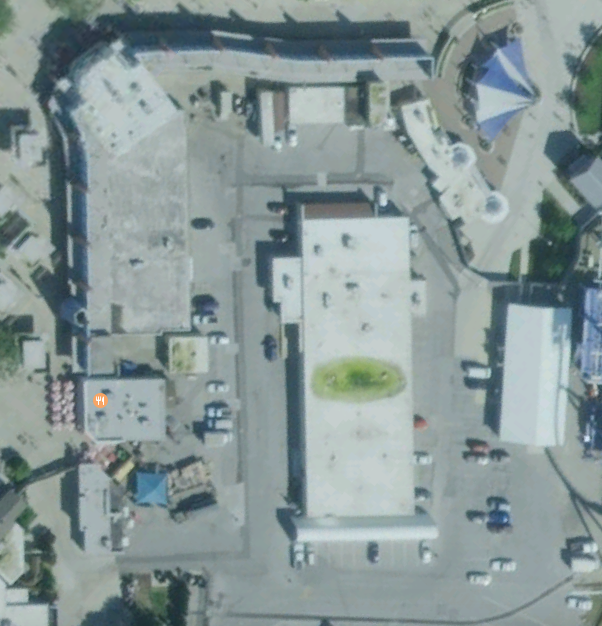 For reference the image content has been rotated so that the left edge is more or less parallel to the main midway. The building on the right is Hexed; the upper left-hand corner is Johnny Rockets, the building at the lower left is Pink's. In the middle, if I remember right, is the Cedar Fair central warehouse for all manner of stuff. This part of the park is kind of critical; if I remember right, it houses not only central receiving for not just the park, but much of the chain, and also what could be the most important place on the peninsula: the cash control office.
That area includes a lot of back-office functions that perhaps should be moved onshore, but that probably better serve the park in this location than almost anywhere else. So those functions still need to be "on Point". But almost nothing here is taller than about 14 feet. My first thought was that a dark ride building (and you see, it could be huge...we're talking Forbidden Journey scale here) could be constructed above all of this. Looking at it another way, maybe it would make even more sense to replace all of these structures with a new building to serve the same functions, but with the warehouse combined with the games and restaurant buildings for better access, more room for trucks to maneuver, and a show building above.
I haven't even thought about what to do with the Coliseum and Pavilion buildings yet, but I wouldn't demolish either one.

Being listed on NRHP does not stop a building from being torn down or modified.

True, although some alterations or renovations can result in a structure being de-listed. I'm trying to think of an example where that has happened..... :)

--Dave Althoff, Jr. (who is alluding to the Hotel Breakers, btw...)

The Kahiki supper club in Columbus was on the NRHP and was demolished to make way for a CVS pharmacy.

Which bums me out severely. I've read articles on what the place used to be like and I would have loved to have eaten there at least once. Ordered one of those Mystery Drinks, too.

Ate there many, many times when we lived in Columbus. It was an epic place to eat; you felt like you were in Epcot (Tiki style).

The year it closed there were people lined up outside nearly every day (no FastPass).

Here is a look back:

Incidentally, some of the workers tried to resurrect it on a small scale in a strip mall with a small Tiki restaurant, but that never survived and shut down before we moved up here.

It was Walgreens that bought the land, by the way.

There was another place in Columbus called Grass Skirt Tiki Room that I absolutely loved. Sadly, they closed their doors in August. I’m really bummed about it. They still do a pop up at other bars from time to time, but it’s not the same.

Thabto said:
Being listed on NRHP does not stop a building from being torn down or modified.

Except the owner of the structure can’t use public funding to have it demolished.

Kevinj said:
Ate there many, many times when we lived in Columbus. It was an epic place to eat; you felt like you were in Epcot (Tiki style).

The year it closed there were people lined up outside nearly every day (no FastPass).

Here is a look back:

Incidentally, some of the workers tried to resurrect it on a small scale in a strip mall with a small Tiki restaurant, but that never survived and shut down before we moved up here.

It was Walgreens that bought the land, by the way.

Because the world needs more Walgreens...

They've started the process of having 200 less Walgreen's. At least 2 closed in my area.

With that 200 less stores, that leaves us with approximately 1 Walgreens for every 3 Americans.

How are we going to survive?

There is a Walgreens opening in a former bank. Sign just says Walgreens Pharmacy and word around the campfire is it will just be a pharmacy with a drive-thru (no store attached). Of course there is a Rite-Aid with a drive-thru just across the street, which is in the parking lot of a Walmart Super Center which also has a pharmacy. Clearly a pharmacy was needed to service this area.

We had an intersection in a northern suburb where a CVS, Walgreens, Rite Aid, and Drug Mart appeared one on each corner. The Rite Aid has in the meantime closed, but still...

Kahiki was awesome. It was our prom date, like so many kids in Columbus, but everybody went there at one time or another. Toward the end business was bad and the place was run down. But when they announced it was closing all of a sudden you couldn’t get in. Everybody wanted to go again. Between a nice dinner and a couple of lunches I think I went three times with a real tear in my eye the last time.

Josh, I didn’t realize Grass Skirt Tiki Room had closed- shows what I know. The developer of that restaurant had a few different spots around here and I understand she’s moved away now. She was a bit of a kook anyway. I think we went there once or twice. They tried, they had some of the decor from the original, but it certainly wasn’t the same.

She was.. eccentric, but that's what we loved about the place. They had excellent food, too. I still want to believe that parking around the area may have led to the eventual downfall, because it was always difficult when we dropped in, but that could have changed (for better or worse) in recent months.

There's a place up here called the Tiki Underground, that we've been to once, and we liked it but we really haven't had a chance to actually scope it out and see what they're capable of. We will have to spend a weekend evening there and see if they really deliver.

We have T.U. on our radar; did you just get drinks or also try out the food? The menu looks pretty limited, but that's not necessarily a bad thing.

We did both. We had small plates and not a full meal. Drinks are strong and well crafted, and the food was tasty. The space is pretty big inside, too.

Ooooh, interesting. I'll make a note to check it out if I can.

...this is apparently now PolynesianRestaurantBuzz. XD

I really miss the Kahiki. They will never be able to build anything like that again, the cost would be enormous. Maybe in a place like Vegas or a Disney resort. It was an absolute tragedy that they would tear that beauty down to put in an ubiquitous Walgreens. Somebody had the big tiki gods from the front entrance lying in their back yard. You could see it on google maps or bing birdseye several years ago. I have no idea if they're still there or where they are today.

Tiki became popular after WWII and the Pacific arena. I heard the owners' wives did a lot of the shopping overseas for the decor of that place, like the bathroom sinks. The first owners and developers of the Kahiki were also the owners of The Top. a long time steak house still in business, and The Wine Cellar, which has been gone for many years.

Also, my grandmother lived on the road that the Kahiki was next to, Napoleon. We never ate there when I was a kid, it was always fascinating and a landmark that we knew Grandma's was near when we saw it going up Broad St. I finally ate there for the first time when I was a senior in high school Then we all became fairly regular diners at the Kahiki and always for special occasions. My future mother-in-law at the time was so impressed she somehow ordered a bunch of Kahiki fliers to hand out at my bridal shower for when the out of towners came for my wedding weekend. She's always been a little strange that way.

Anyway, just a shame it's gone.

I am a total tourist, but it the Thirsty Pony any good?

I only hit it up about once a year driving out from Pittsburgh...it's not amazing. It's a totally acceptable spot outside the park for a few beers and a snack...but if you have really ventured out much and want to really experience some time in Sandusky you will want to move on pretty quick. Much better options within 10 mins...we usually end up at Small City Taphouse or OH Taco.