Best strategy for getting out of the parking lot?

I spent the day at Cedar Point today. It was a ton of fun - I finally got to ride Windseeker, which was great (I think I got a major bruise in my pubic bone getting out of that seat though! Ouch! Can't they lower the wheel a little so us shrimps can at least put our feet on the ground to get out of that hard plastic seat with the high bump in the middle?!). The parade and show was awesome and I was really impressed by how hard all the performers are working to make the event exciting for the spectators. Great job!

This is the first time in decades I've left the Cedar Point parking lot at closing time. I forgot how chaotic it is! Do you all have any strategies for how to get out of the parking lot quickly at park closing, other than just waiting an hour for the mob to clear? is there a particular exit to aim for, etc.? Just wondering if there's a method that works better than mine, which seems to be "Get behind several cars that don't move for 20 minutes, then drive diagonally across the lot to get into the line that's going out the exit closest to the park entrance and hope for the best."

If you plan to leave at closing time don't park in the back, or if you do move your car to the front before closing if you're going from the water park to park or out to the car to eat. Since I come from the east I normally try to park in the east side of the lot and go out the little exit at the far east end of the lot that goes directly to the chausee. Might not be possible right now with construction but they changed the gate so instead of it having to be opened you drive up to it and it opens to let you out of the parking lot as you approach but not in from the other side. An improvement I really like over just hoping it's been opened. heading out the other way I really don't have any strategies I'm still getting used to the new configuration of everything since construction.

Park here. A few extra minutes walking going can pay off big when leaving at close. 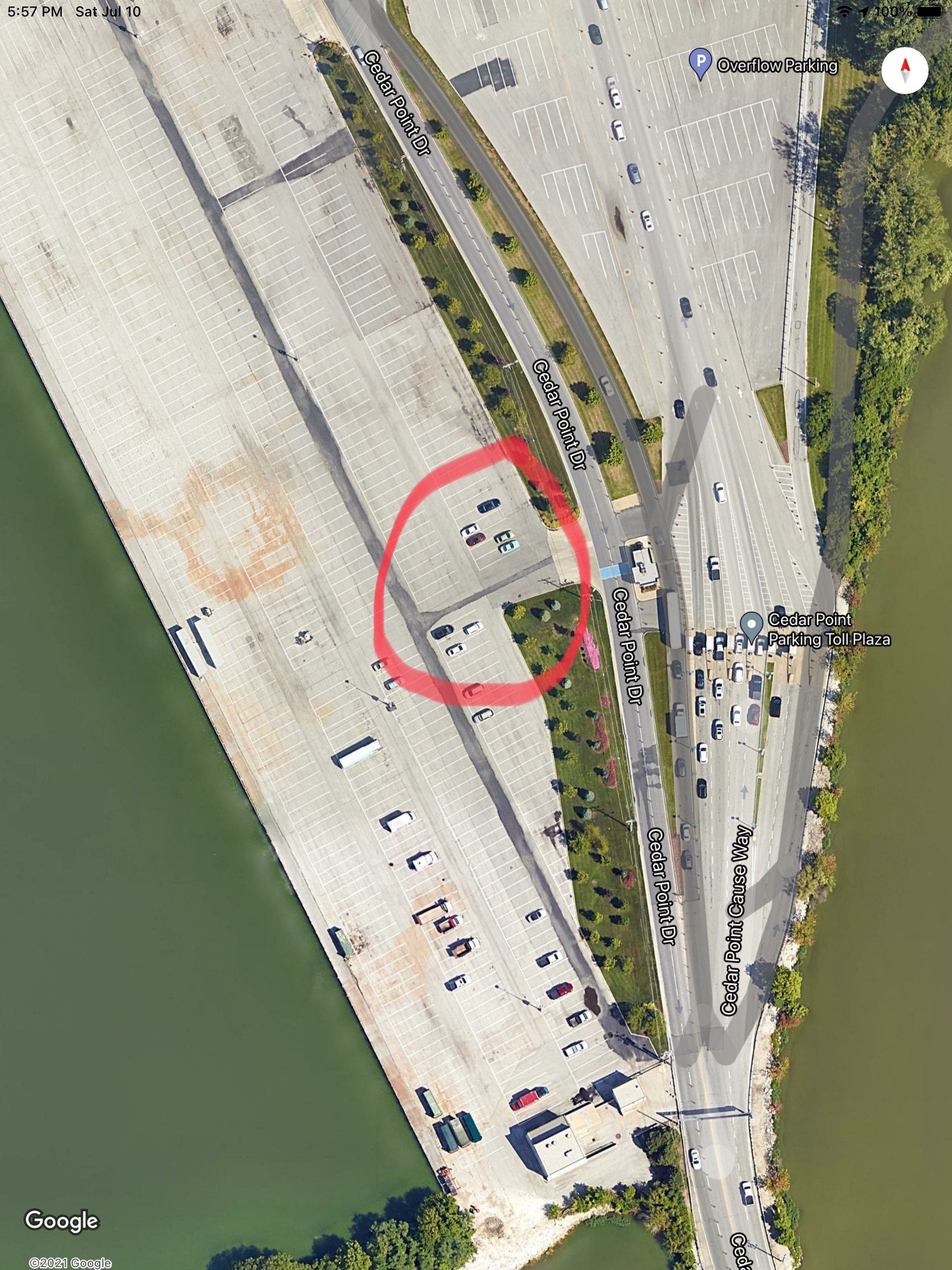 Park in Sandusky and take the Jet Express.

^^ Cargo, serious question, how do you get into that lot there? We usually stay at Breakers and never have to worry about leaving the lot at night, but this year Breakers was all full by the time we had our dates in order and we are staying off site for 4 nights. Can you just make a left and then another left after you get through the parking gates to get over there?

The first 30 seconds of this video should give you a good idea of where to park:

That is where Clark would Park.

Some things are best left to the dustbin of history.

Regardless of where you park, cutting in that entrance to the beach and boardwalk is one of the smartest things CP has done to the main lot.

Best strategy for getting out: sit and wait for everyone else to leave.

^^^ yep, sometimes I do that and take a nap and then the parking lot sweeping machines wake me up. But If I want out quickly (as much as possible), head for the exit lane along 'handicap parking row to perimeter road and then compete with those exiting from soak city lot. Generally the traffic flag person does a good job there. Faster than any other exit out of main lot.

Adding to my post above for the exit lane along handicap row. The car flow from soak city is not always continuous and when the traffic flag person sees a break in traffic from soak city, he/she will stop them and let the entire handicap exit lane go out, and with perimeter road having its' own lane out, it's free sailing all the way out to Rt.6.

Dennis, I have noticed that trend as well. Good pick-up. Thankfully at Cedar Point I have never had the same difficulty we had back in the day attempting to exit the Richfield Coliseum after The Miracle in Richfield or one of the several concerts we went to.

We still talk about the year-long wait we had trying to get out of Blossom’s parking lot.

Ah, Richfield Coliseum, I remember those, still see the big empty field where it was when I drive down I271. Oh,and KI parking lot at closing and then getting gas for the 4 hour drive home at the packed/crowded gas stations by I71.

We still talk about the year-long wait we had trying to get out of Blossom’s parking lot.

At one point I turned off the ignition in my then-awesome 1995 Chevy S-10 and we just laughed at the insanity. No one beats Blossom at exit insanity.

Reason #147 to stay on-point. The walk home to Breakers is pretty easy.

^ I've never been to Blossom but my gf has, and I'm pretty sure it's an extremely similar setup to the place we have out here called Starlake. So I feel your pain, and will be once again for DMB at the end of next month. I think the plan now for us when we leave the park during our trip this year will be just to chill somewhere until the crowd dies down. Probably end up at the Surf Lounge or something until the mad dash is over.