Unsolicited musings as written by me...

My youngest daughter finally reached the 48" threshold, so we decided to make a day trip to Cedar Point on Sunday.

(1) Anticipating a larger crowd, we agreed to ride Millennium Force as soon as we entered the park. Everyone agreed that it was "awesome!"

(2) After a ride on Iron Dragon, we pulled ourselves on a floating raft through the standing waters left in the former holding pools of Shoot the Rapids and entered the Forbidden Frontier. Three and a half hours later, my daughters thought the new attraction was "awesome" and I felt gratitude to the actors for engaging my girls with "essential and important" deliveries of plastic carrots, handwritten "secret" notes, wrapped but empty boxes, and random rocks (a special tip-of-my-cap to the young red-haired actor who, noticing my girls' seemingly exhausting, delivery routine, offered a stuffed pony head on a stick to "speed up their mission.")

(3) We rode Magnum two times and enjoyed both rides. The youngest declared that she "loved it" and seemed particularly smitten to learn the insider information that row 17 is the golden seat.

(4) Blue Streak provided what appeared to be its ultimate ride. I don't know if we were lucky or if the park made improvements during the off-season, but Blue Streak went from a coaster that I enjoy to one that "couldn't be any better." All of us left the station laughing, giggling, and regaling each other with stories of how we "almost flew out of our seat!"

(5) Frontier Festival - I felt disappointed with the new festival. The BBQ and Brew festival grew into my favorite event at Cedar Point primarily because of its value (and adequate BBQ and drinkable beer). The re-branding of "BBQ and Brew" to "Frontier Festival" seemingly coincided with a decision to increase substantially the cost of food. And, although the quality of food seemed also to increase, I left feeling that the park overshot on its pricing model. Plus, who were the ad wizards that decided to create a festival offering only BBQ food when the park just opened a restaurant offering BBQ food on the other side of the midway? It seems counter-intuitive to think that the park's food service department wants to compete against itself like this. Had the festival included non-bbq food I likely would have sampled both the new restaurant and the festival. Instead, I ate only at the festival. Seems like a poorly thought out idea. With that said, the sunflower theme was great and the area looked festive.

(6) I loved the added themeing around the Mine Ride, especially the sounds effects and lighting in the new tunnel. Very cool.

(7) With all the improvements around Frontier Town / Forbidden Frontier, we only had time to make it to the front of the park for 20-30 minutes.

(7) With all the improvements around Frontier Town / Forbidden Frontier, we only had time to make it to the front of the park for 20-30 minutes.

I've been to the park twice this season so far and have yet to ride anything closer to the main gate than Millennium Force. lol I've been really enjoying the improvements in the back of the park this season.

Glad you're little one enjoyed herself on the "big kid" rides!

I agree with you about Frontier Festival. I understand they wanted to make it appeal to a broader audience and make it more family friendly so they increased the variety of the food and dialed back the selection of beer and also added wine, lemonades, seltzers, etc. The area looked great and it seemed like they stepped up the entertainment a notch at least on the weekend, but the food, beer, and overall value took a step back this year in my opinion.

We bought one pack of tickets for the four of us thinking we might get a second and kill the whole evening there, but once we saw the small size of the samples they were giving, we decided to just drink our tickets and forget about wasting the rest of the night there. Size wise, there was way less of a difference between a one ticket item and a three ticket item than in the past. There wasn't a choice to get a small portion for one ticket or a large portion for three. Everything had a set price depending on what it was and all portions were on the small side. Also, there was no extra pour for passholders like there was last year.

Overall, I can't say that I'm surprised at the changes because Brew and BBQ was almost too good to be true and the offering this year seems more in line with the price you expect to pay at an amusement partk, but to be blunt, the event probably won't be a "must do" anymore for my family the way Brew and BBQ was.

The Make Me Whole Department.

^^ That's kind of what I was afraid was going to happen when they removed 'brew' from the name. Granted there's still an extensive list of beverages available, but part of the fun the first year was having representatives from the breweries (or in some cases, even the owner) working their own tables. We struck up conversations with a few of them and sampled things we might not have tried otherwise. I will say though, the event does look a lot classier this year with semi-permanent booths for the food and drink rather than tents with tables.

to be blunt, the event probably won't be a "must do" anymore for my family the way Brew and BBQ was.

This is how I felt too. We actually went to the park because it was the last weekend in June we were available to check out the new festival. Thinking it was going to be like Brew and BBQ we decided to rearrange our weekend and drive down to Sandusky. Had we known how the festival changed, we likely would have not gone to the park. But, now we know!

I didn’t participate when I was there this weekend, but I can add that Frontiertown smelled absolutely incredible all weekend long.

I have to agree. Previously the Brew & BBQ seemed like an amazing value... this year not so much. Samples are small, and there is no rhyme nor reason to their respective cost. 3 small flat wings = 2 tickets. 2 small drums = 1 tickets.

But which of the Seven Duffs will you be? Tipsy? Remorseful? 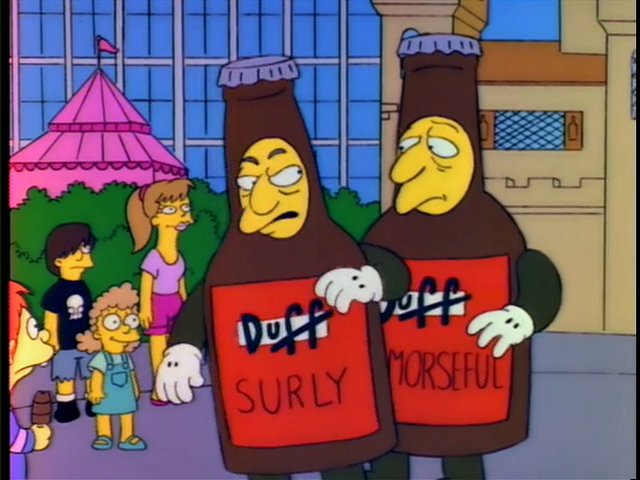 Two of us got 20 tickets and were stuffed by the end. Now we didn’t drink anything either due to having the drink plan but we’d found it to be almost hard to use up all the tickets. I guess it depends on your perspective. No need to gorge yourself just enjoy the samples.

Can anyone elaborate on the math here? Is it 3 tickets for a 12 oz. beer? Just trying to figure out the value proposition in advance of our visit.

Can anyone elaborate on the math here? Is it 3 tickets for a 12 oz. beer? Just trying to figure out the value proposition in advance of our visit.

Yes, 3 tickets per 12 oz beer. So you have two left over from your 20 tickets for something else. So almost $5 per beer. Fair deal IMO, not great.