Taste of The Point and Food Upgrades

Hopefully the new (and proven) configuration of some of these food stands will serve to accommodate diners quickly and efficiently. It seems the latest standard for CF restaurants and I like it. It will get lines off the midway, the stations are flexible in terms of throughput, and gone are the days of waiting while an employee shouts orders from a counter window to the back of the stand then waits. A major concern (of ours, especially) is staffing and this may be the way to solve some of that. Customers will go through a line and select items already made and easily dished up by one employee, maybe two. As long as the kitchen is doing their job, it’s all good. And consistency in the product will be necessary as well. I haven’t tried Back Beat or Hugo’s but I hear and read back and forths about the quality.

The new buildings are attractive, but I have a small note for Cedar Point around that. The look of them is more suited to a mall or something. Easton Town Center would be the design esthetic. I just wish they looked a little more amusement-parky and cheerful, that’s all.

In the announcement they mentioned another new venue, The Roost, which will serve actual pieces of fried chicken. I think they said it will be where Mr Potato is, or was. While I’ve been aching for the return of fried chicken to the park, a missed opportunity is to not take the retro/nostalgic route and somewhat recreate the long-gone Chicken Patio. In the 60’s and 70’s it was the place to go for fried chicken. It was around where Hugo’s is now and had a small building and a nice outdoor patio with picnic tables. I doubt there are many on here who remember now, but it was popular and busy.

Anyway, those are my thought around these welcome additions.

Chicken Patio was very popular back when I prowled the picnic areas. Back when we carried pagers that only said “Call your office!”, the Patio was my phone. Catering had a shed behind the Patio where we stored cups, plates, condiments, etc. 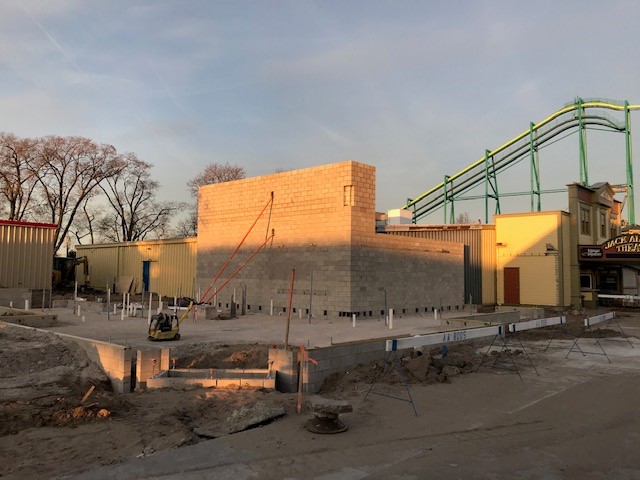 They're moving at a much faster pace than Culvers.

Culvers is the only place I know where year round you can "enjoy" a CP quick service type of food experience.

I am concerned about pinks hot dogs leaving it is one of my favorites at the park. It sounds like the mac shack is gonna replace it.

As far as I'm concerned, it should have been Tony Packo's instead of Pink's in the first place. Showcase great local stuff. However, I understand that's not how large corporations operate.

Skydiver said:
As far as I'm concerned, it should have been Tony Packo's instead of Pink's in the first place. Showcase great local stuff. However, I understand that's not how large corporations operate.

Honestly I’ve lived 30 miles away from Cedar Point my whole Loooooong life and I’ve never even heard of Tony Packo’s outside of this thread.

Edit: I see now, they are Toledo area. I’m on other side of the point.

I hoped with Melt and this brief concept we they seemed to have to feature "local" restaurants in the park we would've seen something like Tony Packo's replace Pink's. Or Happy Dog from Cleveland. But that seemed to stop with Melt.

I would love to see more area restaurants from Toledo or Cleveland make their way into the park. I would much rather see that than chain fast food joints.

If there were a Barrio tacos restaurant, you'd hear no complaints from me. :)

Just a taco truck on every midway would work for me.

I second the Taco Truck on every midway. It doesn't look the prettiest, but at least there's an effort by the trucks to make great food with quick service.

Dvo said:
If there were a Barrio tacos restaurant, you'd hear no complaints from me. :)

Is Melt doing ok at Cedar Point? I had an awful experience and never returned.

I had two awful experiences there, and I should know good from bad as I live in a Melt town. Then I’ve had a couple of good experiences there, but those were spent at the bar.
A friend of mine who works at Melt Easton told me that Melt management has pulled out of CP, leaving the name, the menu, and CP managers and staff to run the place. I’m not sure how that works, and it seems like a bad idea, but that’s what he said. In walking by I see that it looks busy every time, but maybe that’s because it’s likely an hour and a half experience. Since the majority of CP visitors are likely Clevelanders, I’d guess they would be familiar and drawn to it.
Unlike Pinks, which is known to no one in Ohio.

Barrio would be a perfect fit for a park, they have already gained experience in quick service from being at Progressive Field in Cleveland. I wouldn't mind seeing one pop up at CP either.

Heck, even a simple mexican street taco style truck would be amazing at the park.

This Barrio sounds a lot like our Local Cantina here in Columbus. Which I wouldn’t be mad at.
Although their specialty margarita is called Mustache Ride, and even though the word “ride” is there, I reckon CP would be changing the name.

I love Melt (Canton), but other than perhaps stopping in for their beer selection (assuming it's as good as the other destinations), I have always viewed it as a strange fit for Cedar Point. The brand is there, and the food is great, but we've never walked through the doors at CP.

Whenever we go to Melt, there are two things that are true; 1) I'm already looking forward to the leftovers because I can't imagine finishing anything I order, and 2) we are on no time schedule, because Melt takes its time. And that's OK. But neither of these two things seem conducive to the average park visitor.

And now I'm hungry for a Lake Erie Monster.

In my opinion the problem with Melt is that it is in the park. Places like Friday's and Famous Dave's BBQ are chains associated with the park but are actually outside the park. Last I was aware, Melt was not on the dinning plan. So when we are in the park, I want to get my money's worth by using the dinning plan. And when it comes to a Saturday night out, I don't even think of going to Melt.

^Apparently that's not a problem at all, seeing as multiple people above you have a similar feeling that the restaurant is always packed. And I'm in agreement. They do always seem to draw a very good crowd both in the restaurant and at the bar.