The report said the ride reopened, as usual, on Monday morning. That means it was closed after the accident because this idiot can't follow directions. I really feel for the people who couldn't ride on Sunday evening after the accident.

The guy's injury looks terrible! That's quite a deep gash. I'm also confused how a rounded loading gate could cause that.

“I’m very familiar with Cedar Point’s loading and unloading process. I rode every coaster a thousand times. I worked at Geuaga Lake years ago. I know how these things work.”

Then how in the hell is it the park's fault that your leg got caught in the gate?

Theron said park management contacted him to apologize Monday and asked him to submit his associated medical bills. Theron said he has contacted an attorney and is considering legal action.

What a complete ass. Regardless of what exactly happened, the park is responding responsibly by offering to pay for his associated medical bills. But no, that's not enough. He wants to make some money from his stupidity, so better invite the media into your hospital room and sue everyone.

I hope when the lawsuit comes he gets blacklisted (or is trespassed the proper term) from all Cedar Fair properties.

Pretty sure he either tried to squeeze by it and rammed his leg into the gate on the way by or just got caught a little bit and yanked his leg out rather than just pushing the gate open a little. Those things don't close that fast or with that much force. You can push them open if you really need to (if a train is moving in the station, it will stop too when you do it).

I also doubt the operator was confused on how to open the gate although he may have been marveling briefly at the stupidity of this guy.

Whatever he wins out of it (if anything) won't be worth the ridicule he will take from being injured by a platform gate.

I have fond memories of the days when rides had no gates. Guests were simply instructed to stand behind the yellow loading area. I guess gates didn't solve all the problems of mankind's stupidity.

I thought the gates on Fury 325 were interesting. Seemed like they operated independently. Here's a photo the park posted during construction. Looks like each gate has a separate cylinder. And the gates don't look like traditional gates. I can't seem to find a picture of them. 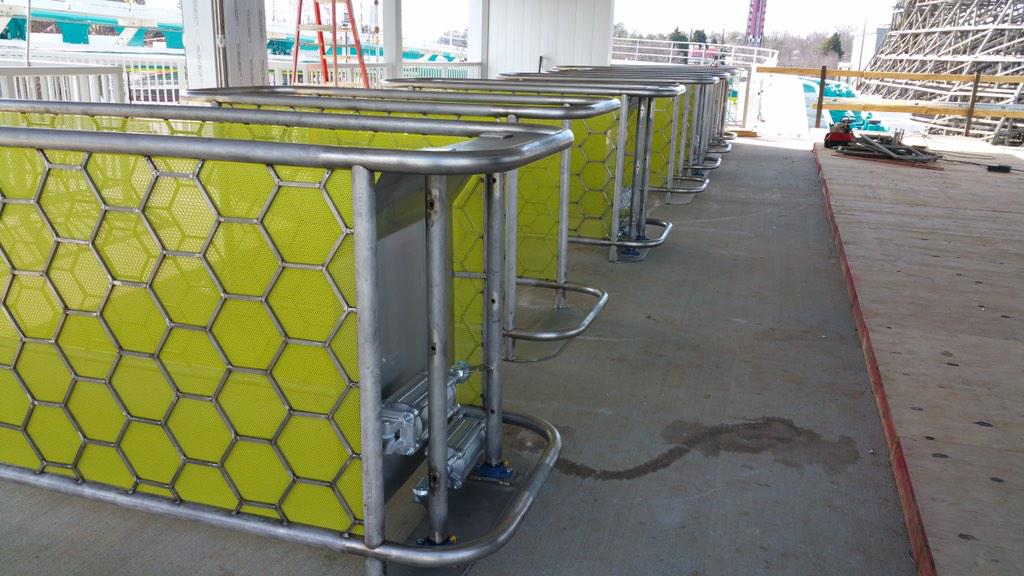 Wow, we seem to have a surplus of pitchforks and torches here.

My 8 year old just saw the news report and said, is that man mad at Cedar Point? And I said yes. And my son said... he should be mad at himself!

I do feel bad for his injury and it seems believable since he is a season pass holder, long time roller coaster rider etc. However, besides the medical bills I have to disagree with any litigious pursuits.

This guy and his 'friends' keep saying that he wasn't trying to sneak through the gate and the park is wrong for saying that he was. He's also saying that he wants the video on him getting on the ride released but the park is refusing. Something smells fishy here. So my question is, are there cameras on any of the loading platforms or not? My gut says no, but I could be very wrong.

Wow, we seem to have a surplus of pitchforks and torches here.

He brought the scrutiny on himself. Amusement park injuries, regardless of who is at fault, are rare, but they happen. The only reason we're hearing about this specific injury is because he sought attention through news media.

I suppose, but I see this as a terrible injury that probably was a result of many tumblers falling into place, not simply the result of "some complete ass." If you're excited, you're tired, you're hot, judgement can be impaired on both sides (guest and operator). None of us here know many details about what happened other than this guy's foot is f'd up.

Those gates don't operate like a garage door (i.e. open up if there's a paper towel roll like object caught in it). I have had to remind my sons many times to respect them, because if they don't pay attention and got caught in one, it would crush them.

That being said, I do regret that this will probably throw CP's reactionary management into a safety tailspin, and we're all going to have to pay the price somehow through new procedures, checks, delays, etc.

If this guy was that smart, not only would he have not gotten 'stuck' in a gate, but he also would not have been posting comments to all the news stories yesterday, on facebook, under his real name. He is looking for a payday, plain and simple.

Somehow millions have been able to ride Raptor without getting stuck in a gate during the past 20 years. I wasn't there of course, but it sure seems like this guy was indeed doing something he shouldn't have been doing.

Well he worked at Geauga Lake, not less than 8 years ago, so obviously he knows better.

Incidentally, I've noticed that the gates around WDW have slowly been altered to allow a limb-width gap around them to accommodate people like this who don't pay attention. One might consider that proactive, or kind of sad.

In any event, every one of us has lapses in judgement, and have done a really stupid thing here and there, and I mean truly boneheaded. I'm talking something so stupid that if people looked at that one thing out of any context, it would make you look like that one "complete ass" in "20 years of millions" that "should have known better."

I'm not trying to defend the guy, cause let's be honest, it does appear that he's aiming for a payday with all the "LOOK AT ME!" that's going on. But hey, if my foot were f'd up because the gates should have had better safety controls, I'd be seeking compensation also. I guess the other way to look at this is also what if it were a kid? If the gate did that to an adult foot, what would it have done to a 8 year old's torso? We'd be having a way different discussion then.

The gates have a perfectly effective safety control. Stand behind the yellow line, only walk through gate when in the open position, and notice the gates are closing when they say "hey, gates are closing".

I've never noticed any cameras on the loading platforms.

We'd have gates to open/close at all red lights, and probably reinforced fences down the middle of two lane roads, so that one cannot accidentally swerve into oncoming traffic.

Speaking of roads and gates, whatever happened to those retractable posts on Cleveland Rd at Butler? When I was in town last weekend and earlier in the season they had cones blocking that lane.

hmm, what does not seem to be in the news is the guy I saw at the food stand next to Cedar Downs that had a Cedar Point policeman kneeling on his back while being handcuffed with a couple other CP policemen standing by and two more briskly walking up to the stand. The policemen walking was what drew my attention because they were moving in that "I've got a place to be now but don't want to attract attention by running" look about them, so I looked around to see where they were going.

There was a kid there recording it on his phone. No idea what was going on, didn't hang around to rubberneck as Blue Streak was calling.