I have a trip planned to CP in October and I’ll be 26 weeks pregnant. Obviously I know I can’t ride rides but I’ve been going my entire life so I’m just going for the halloweekends atmosphere. Does anyone know if I’ll be able to go into haunted houses? I do not scare easily so I’m not concerned about my heart rate or anything like that.. I mostly enjoy the haunted houses just to look at the decorations!

CP has illuminated 'things' (don't know what they're called) that you hang around your neck to indicate to the screamsters that they're not allowed to scare you.

Sort of confused by the question. Are you asking if Cedar Point will disallow you from partaking in the attractions because you are pregnant? If so, the answer is almost certainly no, they wont. Are you asking if we think it's a good idea for you to go into scare zones? We can't answer that, that's entirely up to you.

Perhaps this is a question for your personal physician.
The lines will be hours long, the midways will be packed, people will be running into you forcefully (unintentionally from being scared), the haunts are sometimes jam packed and physically restrictive, bathroom breaks may take some planning in advance due to lines and lack of maintenance.

Thank you. I was just asking if cedar point would allow me to enter the attractions.

As long as you pay, i doubt they have a problem. How would they know anyway?

At 26 weeks pregnant, it may well be obvious.

^ You gonna be the person that picks a woman out of the crowd and says "hey you look pregnant?"

I responded to the question "how would they know anyway?" And again, the answer to that in many cases at 26 weeks is it is obvious.

Very much a different question as to whether anyone working a scream zone/haunt at the park would say anything given what is often obvious. Though from what I know, the park does not appear to have rules against someone who is pregnant going through scream zones/haunts. If that is the case, the answer would be no. If there is such a rule, I could see someone asking the question. I have seen numerous people over the years (not at Cedar Point or any amusement park) ask essentially that question of strangers (most often its "when are you due" or "do you know if you are having a boy or girl" rather than "hey you look pregnant" though). And given I understand that park employees have been threatening paying customers waiting in line for a rollercoaster with criminal prosecution, I would not put much past any given park employee (again assuming there is such a rule though it appears there is none).

Assuming we were talking about a ride rather than a haunt, do you think a ride op would ask a question given someone 26 weeks pregnant is getting into line?

Hey Bjbaker06 if you want to have some fun and see a face in a true state of horror take $5 and go play the weight guessing game. XD

CP has illuminated 'things' (don't know what they're called) that you hang around your neck to indicate to the screamsters that they're not allowed to scare you.

Are they still charging an unreasonable amount for them? 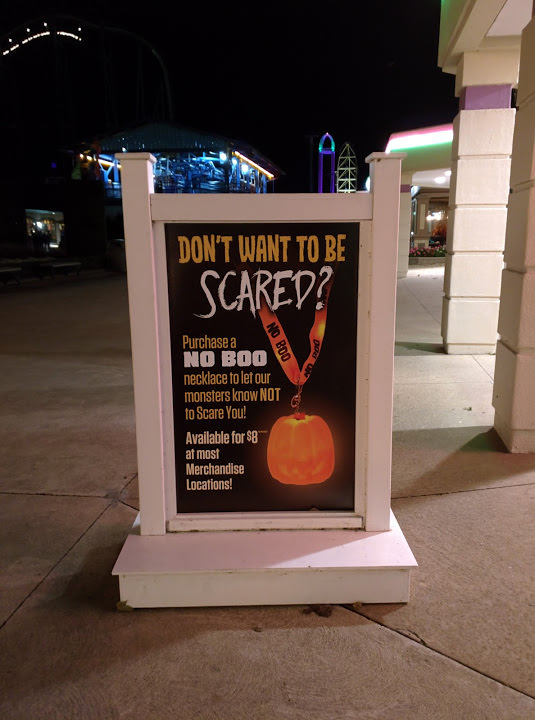 Saw a post elsewhere they are gonna be $12 and change this year.

Maybe you can find the same thing at the local party store without the lanyard.

I agree! We should all have to pay $8 to get scared because you brought a 10 year old with boogie man issues to Halloweekends.

Redsfan, I think you may have gotten it backwards. Purchasing and wearing the necklace gives you immunity from getting scared. Anyone without the necklace is fair game. And they're only valid in the outdoor attractions.

Reds fan knew what he was saying, and he’s spot on.

No, he's not. I get that they can't really give these things away. But twelve friggin' dollars each? I get that parks have crazy prices for a lot of things, and I generally don't mind spending coin to have a good time.

But twelve dollars each? That's insulting, and a pretty good way to drive families away. I mean, I get that they don't exactly hurt for attendance during HW, but this is one of many incremental things (like staffing, food quality, etc.) that can add up into a real problem over the long term.

Actually, yes, he is.

They already designate half of every day of the Halloween event as not scary/ kid friendly. If you don’t want to buy the online $10 no boo for the haunted houses, don’t take them in the scary ones.
Money saved, problem solved. It’s halloween, I get there’s going to be different levels of scary for age groups, the park takes that into account.
As a park guest at Halloweekends I pay for entry as advertised for the Halloween event, and I plan for it accordingly, daytime isn’t scary by design and advertised as such.

They are ‘haunted’ houses not Disney fun palaces, as a parent plan accordingly.