I sure wouldn’t like those probabilities if I was a ride-op.

^That is because our governor is an idiot.

You should be thankful for a governor who is keeping a keen eye on the data. The trend in Ohio is concerning. 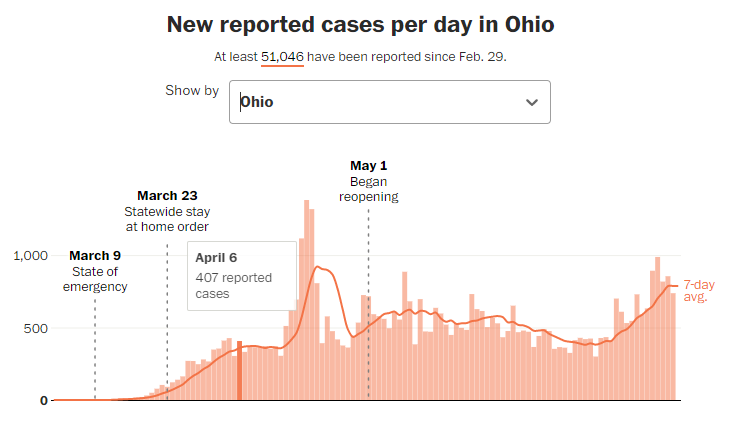 And it does not appear to be wholly or even largely explainable by increased testing: 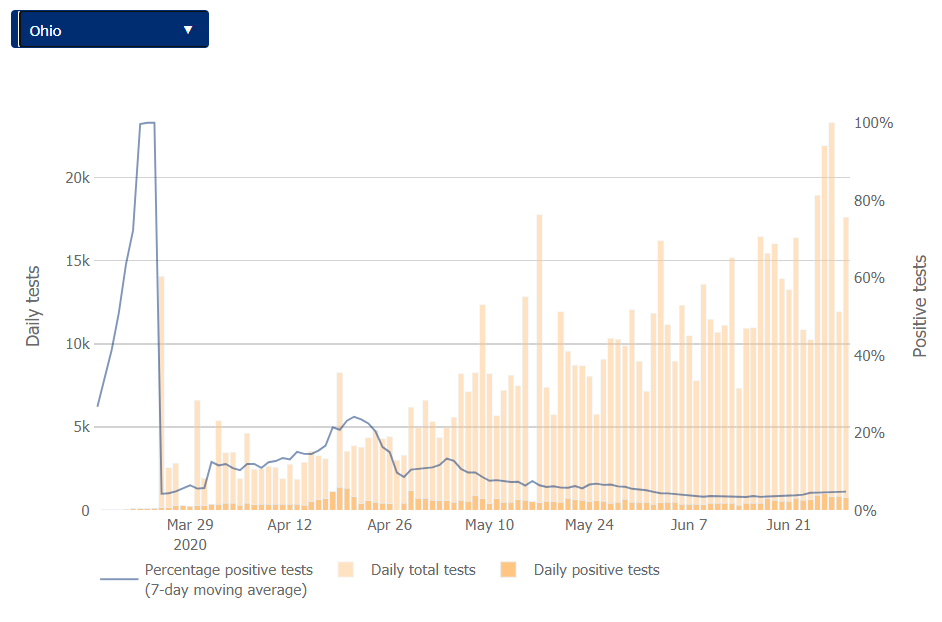 As the quantity of testing increases, the rate should decrease in an environment where the spread is steady or decreasing, since with increased testing more than just those who are exhibiting symptoms are being tested. The positive test rate has increased nearly 10% (~4.4% -> ~4.8%) as daily testing rates have approximately doubled. That indicates the virus' spread is accelerating in Ohio.

Indeed, we can see this via the R value: 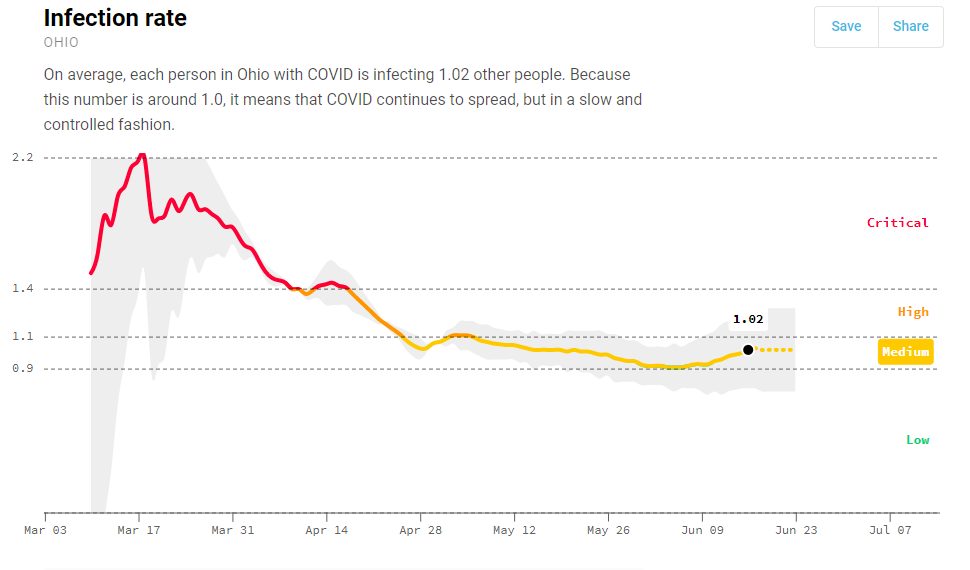 If instead you watch the numbers carefully and take action at a time when R begins approaching 0.9+ and/or your positive test rate is increasing, you can head off major problems with comparatively small efforts, wreaking less economic and social havoc in the long term.

We're seeing an extreme version of this play out in places like AZ, TX and FL right now. They should have taken actions weeks ago. Instead, they're in for some seriously painful economic and social disruption in addition to the health and death fallout.

And among all the above troubling data, Cedar Point and Kings Island are set to open over the next couple weeks. I can't imagine that will help bend the curve in a desirable direction.

I meant DeSantis. I live in Florida. :)

I think Kings Island would be a bigger concern. That is near Ohio's hotspots. I heard DeWine specifically mention Hamilton and Montgomery counties a few times yesterday. Those are the Cincinnati and Dayton areas respectively. But with a mask policy at the parks, it may not be as bad as we would think. How well the policy is enforced is another issue. Like I said above, I wouldn't be surprised if there's a mask mandate in ALL public places in OH one day or specific counties.

My apologies, I didn't even take a good look at who made the comment. :-) I understand the context of your comment now. Next time I'll ingest more coffee before posting.

I think Kings Island would be a bigger concern. That is near Ohio's hotspots. I heard DeWine specifically mention Hamilton and Montgomery counties a few times yesterday.

On the other hand, Cuyahoga County's increase in mobility has been less drastic (though more recent) so who knows what the Sandusky area will look like in a few weeks. Maybe better or the same than it is now.

But at the end of the day, people should look to AZ, TX, FL, etc., as bright flashing warning signs to pay extremely close attention to even small changes in the trends in cases.

We're not even through the first wave of this thing.

I wouldn't be surprised if there's a mandatory mask requirement in all public places soon.

It's pretty clear that that's exactly what's needed. Especially when you look at what other countries have done to successfully get ahead of this. Unfortunately, a mandate means nothing unless it's backed with fines and/or the threat of jail time, which is also what several other countries have done. But Americans have already turned the mask issue into something that's strictly political, so I don't expect we'll do what's needed no matter how many people die.

I would rather have a mask requirement than everything shut down again.

I would rather people just wear masks, without needing the government to force them to do so. But I digress.

The good news is that most people have modified their behavior, at least with regard to mobility, regardless of their state orders. I don't have a link handy, but mobility decreased prior to governments shutting things down, and didn't necessarily increase once things were opened back up.

This is even true in south/southwest, where mobility increased sometime after shutdowns were lifted (suggesting some reluctance), and decreased sharply prior to shutdowns being reenacted, as soon as people saw reports of a spike in cases.

This gives me hope that even with a federal response that has practically been hostile toward science, people generally still trust the experts.

I was hoping to make a trip this summer but I don't see the border opening any time soon. I believe it's been extended to July 21 at this point but with the way things are going Stateside I can see it being several months more. That may be a moot point anyway because I think my pregnant wife may be a bigger roadblock right now.

I work at the Sandusky Mall, and I can tell you we are screwed in Sandusky when it comes to Covid. We already have the tourists coming here from Michigan, and they aren't wearing masks in public at all, not social distancing, and being douchebags if you try and call them out on it. We were great before Kalahari and all the tourist stuff opened, but now that the tourists are here from hot spots, it is not looking good.

Please stay home people. I have no idea why anyone would think going to an amusement park during a pandemic is a good idea, but it isn't worth putting your life and others at risk.

I don't know how much of Ohio's problems can be blamed on tourism in Sandusky, considering the current hotspots are around Cleveland and Cincinnati, but Ohio's numbers are definitely trending the wrong way.

Ohio's new daily cases were the highest they've been since mid-April, and this is not primarily due to increased testing. The positive test rate is now 5.5%, up another 15% from Tuesday. Not good.

It would be interesting to see Cedar Fair's calculus when it comes to different scenarios. I wonder, for example, how economically painful it would be for them to open CP and KI, only to have to close them down again after a couple weeks. In that scenario would they have been better off not opening at all?

I don't know how much of Ohio's problems can be blamed on tourism in Sandusky,

Hopefully, the outbreak that started in Put-in-Bay isn't a sign to come.

And that it took them nearly two weeks to trace it back to Put-in-Bay demonstrates the immense risk of reopening without adequate testing and tracing capabilities. Those partiers have been walking around for up to 15 days now.

I have no idea why anyone would think going to an amusement park during a pandemic is a good idea, but it isn't worth putting your life and others at risk.

People make all kinds of choices every day that adds risk to their lives and others. Both fortunately and unfortunately that is the freedom we get to have in this country. There's choices that lead to more illness and death than Covid has brought and will bring, yet we don't bat an eye because they've become normalized. I do believe the government should play a role in looking out for the well being of its people, but I also believe in boundaries they shouldn't cross.

The only choice-based death rate that I'm aware of that even comes close to the number of COVID deaths in the US would be heart disease. And yes, much of that is caused by poor eating habits and/or lack of exercise.

It's one thing to endanger one's self via bad habits, it's quite another to endanger others, so I think that argument falls a little flat.

I'm admittedly holding out hope that Cedar Fair can operate a park safely. In a capacity-controlled, outdoor environment, the level of risk in theory could be relatively low. Now of course that depends on the park-goers adhering to the rules and policies in place, and generally being cautious.

I'm planning to go to Kings Island on Sunday, but I'm certainly going to do my best to be cautious about things. If people are not distancing in lines, or removing masks, I'm likely going to find the quiet corners of the park and spend my time away from the crowd. One of my larger concerns is that the temperatures are really high right now, and people will likely be looking for relief from the masks.

People make all kinds of choices every day that adds risk to their lives and others. Both fortunately and unfortunately that is the freedom we get to have in this country....I do believe the government should play a role in looking out for the well being of its people, but I also believe in boundaries they shouldn't cross.

Or, as Dr. Fauci put it, "I don't know how to tell you that you should care about other people."

Unfortunately, in America, we don't. And some of us wear that callous indifference proudly, as a badge of patriotism. As if deliberately exposing other people to infection is a good thing. "How DARE you ask that I not spread a highly contagious virus! I'll give it to as many people as I darn well please!"

I mean, it's bizarre. It's appalling. Why don't we care about each other?

I don’t have an answer for that but the same issues existed in the 1918 so it is not something new.

I'm admittedly holding out hope that Cedar Fair can operate a park safely. In a capacity-controlled, outdoor environment, the level of risk in theory could be relatively low. Now of course that depends on the park-goers adhering to the rules and policies in place, and generally being cautious.

Cedar Fair can operate a park safely but they need for the guests to be responsible. That there is the problem. Far too many people that just dont care or dont think the rules apply to them.