I spent 3 summers living in the dorms starting when I was 19. After that I got my own place when I came back and realized I was going to make a go at turning a summer job into a career (I think I was successful?). This was years ago but back then I think maybe less than 2% might have been over the age of 30. It wasn't rare to see an older adult but it wasn't by the dozens. The park obviously knows what percentage is over that age and whether or not a new rule like this makes sense. Interesting though is that some of the more specific jobs had an older crowd that lived in housing so I wonder if that will impact departments like Security, Safety/Fire, Entertainment, Maintenance, and bartenders? Granted maybe its different now and everyone in those departments are young.

I'm really just not even sure what problem they're trying to solve.

That was part of my point. None of us know the context of why this decision was made. But there must have been one, and this must have been what was in the best interests of the park.

At the beginning of the 2017 season, I lived at Commons for a short time, and one of my roommates was considerably older than the rest of us. 3 of us were in our early 20's, and this gentleman was easily in his 60's. At the time, it didn't bother me too much, cause I was only living there for a short time waiting for Cedars to open, but I can't say that would've been the case had I lived there all season.

Obviously Cedar Point has their reasoning for doing this, whether we understand it or not. But as Thabto mentioned above, I think it would have been a more appropriate step to limit those 30+ to either a certain building or even floor of a building.

Thinking back to my 2nd summer and we had an older roommate. I don't recall his age, maybe late 20s or early 30s, but he was chill and it wasn't a weird living situation. He was there because he had just gotten out of the military and was trying to figure out life. We didn't mind him being older because...well he bought us beer.

Everyone keeps saying this paints the park in a bad light. I think the opposite. If I'm a parent of an 18-20 year old, I feel considerably more comfortable knowing people my age can't live with my kid in the dorms. If I'm a 20 year old (or heck, even 25 year old) that's looking to have the dorm life lifestyle of a Cedar Point summer, I don't want older people there. And as a 34 year old, I have zero desire to live amongst college aged kids anyway.

When I did the Disney College Program at age 22 and lived in the housing, there were a few adults in their 40s and 50s doing it too and living in the apartments. It was weird.

edit: I agree that if they see the value they could have a building or wing for the 30+ folks. And maybe down the road they will. And I also could see it potentially being needed for Screamsters and Haunt staff in October. But that's a bridge they will cross when it's time.

I still think buildings or floors of buildings specifically for the older crowd would've been a better way to go rather than outright saying they can't live there. Or they could've worked something out with local properties off premises to house those age groups. Maybe there's more to this story that we are yet to hear that will make better sense of this.

I suspect there's more to the story that we'll probably never hear about.

Pure speculation, but it could have been something along the lines of a harassment suit against CP for negligence and this was one of the stipulations for settling before it saw the light of day in a court room.

All I can say is that I wouldn't have been able to work my first three seasons with this rule in effect.

I lived in Bayside 2013-2015 and I was in a room with two mid-thirties associates and two twenty-somethings in 2014. In 2015 it was myself and another mid-thirties person and a twenty something.

I couldn't afford to get a place on the town with under $9.75/hr wages, with no OT, those years.

I don't think it is wise for me to speculate on reasons for the change.

This was back in the 70’s, mind you, but when I lived there we had older workers. Most of them were seasonal managers or some kind of higher-ups. There was a floor in the Cedars that housed older guys, and there were single rooms in the rotunda and other decrepit parts of the Breakers. Women were in the Gold Dorms and had rooms in Bon Air.
If it wasn’t for the distance I’d seriously consider working Live E or Halloweekends as a performer of some kind. There’s no way I’d live there now, the stories alone would convince me, and it looks like that issue had been solved for me anyway. 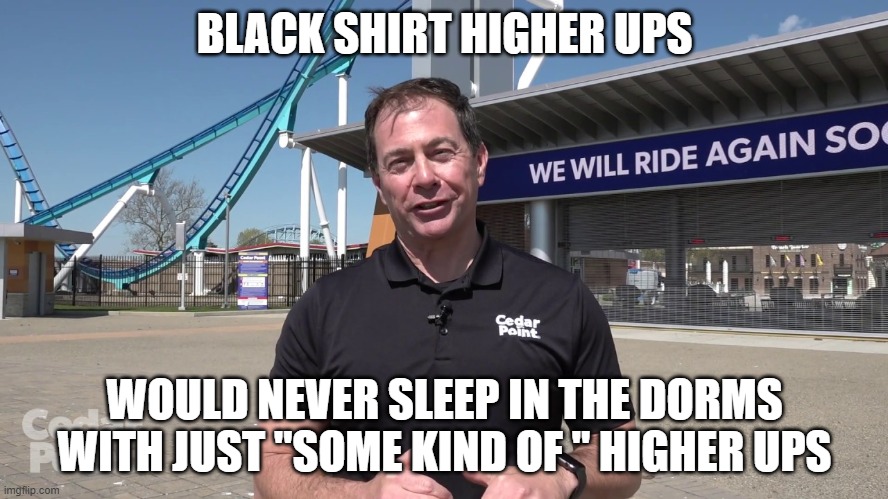 Cedar Point still charges their employees to live in those dumps? This should be criminal. What a joke.

Actually I think CP just wants to discourage more mature, seasoned people from applying because they prefer inexperienced, naive kids who will be less likely to complain about the housing and work conditions. I worked and lived there when I was 18-20 and although it was a unique experience for sure, there isn't any way I could put up with it all as an adult. Being stuffed into a tiny, prison cell like room with two other people and not having a shred of privacy? Having to wait in line to go through a guard booth just to get into your building? Being assigned as many, or as little hours to work a week without any say in it? Being assigned to close one day and open the next, or doing several open to close shifts in a row? CP (and other amusement parks) depends largely on crews of very young, eager to please kids with no job or much life experience who won't realize how insane their living and work conditions actually are. Older people would likely complain more or demand better, I think.

People are making the dorms sound like Guantanamo Bay. I've never worked at CP nor been in the dorms, so maybe I'm way off base here. But I remember what college dorms were like. Tiny spaces for the number of residents. You dealt with it and made the most of it. And my understanding is that people are working the majority of the time anyway. I'm sure they're not the finest places to stay, by a long shot. But it's an optional and relatively inexpensive place to sleep for people who want to spend a summer at the Point. And as for the age restriction, we may never get the official "why," but as KevinJ said, it's almost certain that the park went through many discussions and evaluations before making that decision.

^^ I don't know about that. I think alot of the young kids are more likely to complain about things. They seem to be more lazy and want to get alot without doing much. Kids are more lazier and entitled these days.

People are making the dorms sound like Guantanamo Bay.

When I worked at the park the older dorms, Cedars, Gold, Rotunda, were most definitely not a placed I would have lived. Old, smelly, dark...my dad saw them once and said he had better barracks in Vietnam. Everything else, like the actual dorms off point, were basically your standard college dorm room. I always lived in the dorms and never had a problem. Granted I always made sure my roommates were my friends each summer but it was a just fine for a place to sleep. I worked my ass off each summer so all I needed was a bed for the 5 hours I would sleep.

Am I the only one who thinks that a 30-something adult living with a bunch of college kids is a little creepy?

Sure, there are many 30+ yr. old college students, but I've. never heard of one living in a college dorm. It would have certainly been odd at the school I went to.

Plenty do. But it is largely irrelevant anyways as Cedar Point is a place of employment, not a college dorm.

Come on... it's a college dorm at an amusement park, typically inhabited by college kids, most of whom aren't old enough to buy alcohol.

So has anyone else heard anything about opening day and staffing? I know on coaster college's YouTube channel his start date is mid to late April? I'm curious how much these changes have actually affected the day to day yet?