Anybody else miss CarnEvil?

As you all can probably tell, CarnEvil has been my favorite haunted attraction at the park for years, and I was crushed to see that it was replaced by Feary-Tales, which has to be the worst haunt I've ever seen the park put together.

But my feelings aside, does anybody else just miss the CarnEvil atmosphere? Something about the logo, the signs with the side show freaks, the big kiddy kingdom giraffe out front- all of it really, has just become one of those small but iconic Cedar Point things for me. I don't know, perhaps its just me, but when I think of Halloweekends, one of the first things that always came to mind was that CarnEvil theming. I found it really unique and fun for the park to have, and I'd love to see what happened to it all and possibly see it return to the park one season.

Call me crazy but I really miss this haunt! 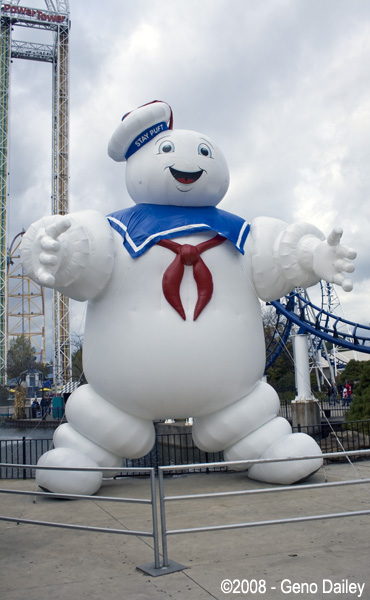 No. Actually I'd say I miss Dissappointment Transport more.

I'll definitely say that CarnEvil was far better than the Feary Tales zone that replaced it last year, IMHO.

Huh. Just me then? Well, this is awkward.

CarnEvil was far better than Fear-y Tales, which really is one of the most under-baked haunts the park has ever put out. Hopefully some more resources will be put into Fear-y Tales, assuming it coming back this season, because there is potential for the theme to be something fairly unique.

I miss CarnEvil when it was at between the stadium and planet snoopy where the 'carnevilers' had a lot of room to roam and chase.

Agreed. CarnEvil in camp snoopy was pretty awful. It was much better near the beach.

I miss the ringmaster who spoke at the podium. That's it. The rest of it was lame.

Anyone else remember when they had the stadium full of water one year when CarnEvil was by Wicked Twister and you could look through the glass and see the drowned clowns? Was that a thing or was I dreaming? I also remember a mermaid show they had during the summer one year...I know that was back when White Water Landing was still around.

Oh yeah... The drowned clowns was a thing. I remember a couple of screamsters getting us good whilst we looked at the underwater clowns. I agree CarnEvil over by the beach was great for all the open space, but the fog never really seemed to settle there with all the wind off the lake.

Please bring back CarnEvil! Feary tales is horrible and lacks greatly in theming. there were like maybe 2 props along the midway, and maybe 3 screamsters who stood around chatting.

Clowns are always scary and crazy fun to be chased around by! Jason and Matt, bring it back :)