If anyone still thinks the absence of Dragster matters, you know, check out the financial results. 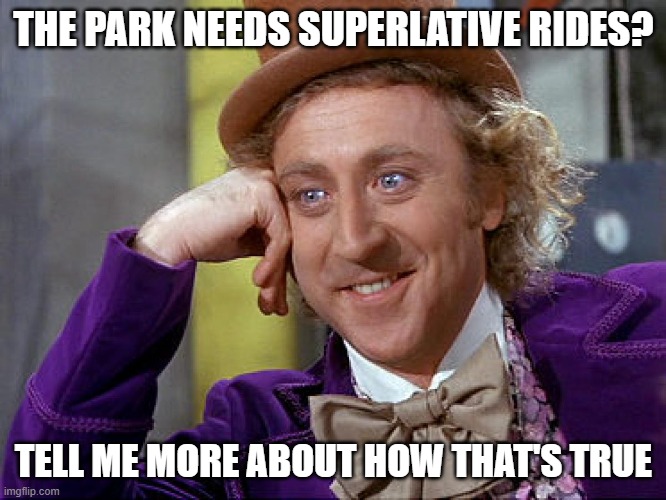 Those attendance numbers are probably inflated a little bit due to coming off the pandemic. There were a lot of people that haven't been to a theme park since before the pandemic hit so it probably didn't matter much what rides were operating. A bigger test will be next year (assuming it doesn't open until 2024) after everyone had a chance to come back this year. Then again we may still be in a recession next year so that might not be a good indication either.

The ride catalog and unique offerings are what attract people to the parks. You keep dismissing the idea of "Suprilitives". Why is it then that almost every major attraction that Cedar Point Debuts has these superlatives? I distinctly remember when Valravn and Steel Veng were announced they specifically drew attention to them being the tallest coasters of their kind. These "superlatives" seem to matter to some degree to the planning team when creating the E-Ticket experiences.

I will say this, I think you are correct in saying that specifically, Dragster is not a make-it-or-break-it to people attending Cedar Point. They could leave it SBNO for years if they wanted and they probably wouldn't feel a hit attendance-wise. I think all that I (and maybe others are saying) is that Cedar Point has deemed it a good ROI to revitalize the ride. They must to some level care about how Dragster added to their catalog of attractions.

I agree though, superlatives alone are not how the industry is going. People expect a well-rounded experience (good food, good views, live entertainment, Snoopys bounce house, and nice bathrooms). Cedar Point (and cedar fair as a whole) is shifting its focus and it is proving successful. (just compare Six stock to FUN. Night and day).

@Maverickdude I do think that sometimes Attendance can be a lacking indicator. For example, attendance is high now at Disney, but people currently attending are getting frustrated with Disneys current operations, they may choose to go to Universal next time instead. 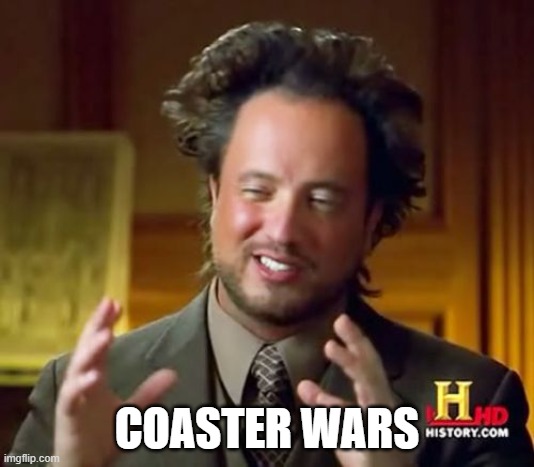 Also Jeff, I am curious as to what the quarter results including Halloweekends will be. The weather in October each weekend was nearly perfect, and some of the Thursday nights were fairly busy as well.

Exit English it seems like you are suggesting that aliens were somehow involved in the coaster wars.

... makes sense... this puts Dick Kinzel in a while new light.

So to those posting that CP will be just fine with or without TTD are you saying CP should stand pat with their current headliners forever? I’m guessing no. So when should they build another headliner? In 10 years? 5 years? Has the amusement park world changed so much that a big, new, shiny, superlative-laden roller coaster is no longer needed to grow or compete? Past history shows that surely is not the case and new unique coasters continue to be built all over the world every year at most parks. I’m honestly not understanding. Using the attendance numbers referenced above to draw a conclusion suffers from confounding variables (reopening normal operations after the pandemic is just one of them). I do understand the idea of a well rounded experience but how long can the good attendance be maintained without a new, shiny headliner?

It's not rocket science. Look at how many major ride investments the park has made over the last ~16 years, and you'll see that on average they've built something major about every 3 years. And yes, I'm including Wild Mouse because despite the jaded enthusiass response to it, it is a major ride investment.

More relevant to the outlandish suggestions in this thread, look at how many massive 400' tall rides have been built in the last 20 years if you want an indication of whether or not parks think building rides of that scale makes ROI sense. And while TTD's tower already exists, adding thousands of feet of expensive steel track onto it in addition to the considerable investment they're already undertaking with the launch and controls improvements would be the same unrealistic realm of adding a new 400' coaster.

You know what else would be a "headliner?" A modern wood coaster, which would cost a fraction of the Planet Coaster-esque TTD extended layout nonsense, and would have the added benefit of further rounding out their ride collection.

It's funny you mention both the enthusiast response and the lack of a modern woodie. Two other random takeaways I had from this past Sunday...

First was walking past someone in front of the boardwalk fence, who was clearly filming themselves for social media of some sort, while saying to their hypothetical audience, "This is where they TORE DOWN Wicked Twister for a Wild Mouse", with a tone of withering contempt usually reserved for Ohio State vs Michigan conversations.

Second was my delayed realization after riding Blue Streak and hearing the ride op dispatch with "Enjoy your ride on Cedar Point's only wooden roller coaster", that huh, for as much as Cedar Fair has invested in new woodies for the other parks over the last decade and change, somehow Cedar Point keeps on keeping on with just Blue Streak to represent.

From what Ive read, heard, watched.. woodies are very expensive. They require routine track walks and constant maintenance and upkeep for the track and structure. They are alot of work from what I understand. I bet that constant woodwork adds up to a pretty pwnny over time.

Also Jeff, I am curious as to what the quarter results including Halloweekends will be.

You don't have to be revenue curious, just read the release. It includes results through October.

That Crazy Dan:
who was clearly filming themselves for social media of some sort

I see those idiots at WDW all of the time, fighting through the crowds to explain why no one is going to visit the parks anymore.

Only if you're Herschel Walker. Zing! Seriously though, it totally depends. A park like Fun Spot in Orlando can afford to build one, and they do a pretty good job maintaining it as well. Furthermore, there are some solid innovations in track construction that are clearly going to change things. See Gravity Group's new vertical laminated prefab track. Folks who have experienced that on Racer and The Beast say it's awfully smooth, and it should last a lot longer.

Also, there's a better case to justify the cost of a woodie considering they do not have a modern one. They already have several massive steel coasters making an extension of TTD comparatively redundant and therefore more difficult to justify.

Only if you're Herschel Walker. Zing!

So the woman in the accident is off limits (which I agree with) but a woman (or.multiple women) more than likely being forced into a life changing event such as abortion is considered humor to you? I think maybe both of those things should be off limits and shows what you're willing to joke about while claiming to have the moral high ground.

Also, there's a better case to justify the cost of a woodie considering they do not have a modern one.

Does the average park guest care that Blue Streak is the only wooden coaster? I would guess as long as a coaster gives a good ride most people don't care if it is steel, wood, or plastic.

^The average park guest thinks Gemini, Mine Ride, and SV are wooden coasters. 🤣

To the average park guest, Steel Vengeance and Gemini are wooden coasters. The park doesn’t need another “true” woodie.

So the woman in the accident is off limits (which I agree with) but a woman (or.multiple women) more than likely being forced into a life changing event such as abortion is considered humor to you?

Did I make a joke about those women? No, I made a joke about a horrible human being and public figure. Don't act like you can't tell the difference.

A park like Fun Spot in Orlando can afford to build one, and they do a pretty good job maintaining it as well.

have you ridden mind-blower at the Kissimmee location? Woof that was a rough ride. I'm guessing that white lightning has better upkeep.

I think CP would benefit from a woodie along the lines of Mystic Timbers at KI. That woodie is pretty damn good.

I agree, that would be nice addition to CP for sure.