^you're assuming that the park will be able to operate Dragster as it currently is setup, queues and all. I doubt very seriously that IF the park intends to open it again, which I don’t think they do, the ride and its queues will likely require extensive modification per whatever the legal outcome will be in addition to maintenance plans, overhauls, track replacement, etc. (all of which adds up real fast on a ride that barely operates) Though we will never know those details as I’m sure the park will likely settle any lawsuit before it goes public.

The park could do something truly amazing with that space versus dumping more money into a ride whose reputation is now permanently damaged and has been a maintenance nightmare since day one. No better time than now to remove it.

Dave, as someone who knows a thing or two about ride inspections, what's your take on this blurb from the report?

Spears stated that the Top Thrill Dragster ran only a fraction of the traditional number of hours in 2020 due to pandemic related closures. Cedar Point and the Top Thrill Dragster’s manufacturer, Intamin, agreed to amend the offseason overhaul procedures to reflect the reduction in run time. Specifically, Intamin, via email, agreed to allow Cedar Point to “a limited overhaul” of the Top Thrill Dragster which included a “complete inspection on one complete car for 5 of the 6 trains, all others will receive close visual inspection. Minimum of 17% of all critical components will be inspected.” ATTACHMENT 15. Spears stated that they complied with Intamin’s amended procedure by overhauling Car 3 on each of the six trains which was approximately 20% of the trains. Documentation of this overhaul procedure can be found in ATTACHMENT 11.

In other words, only car #3 of each train got an overhaul last winter.

It's strange that after the incident they found this same part loose on the purple train, but in the morning apparently no one found it to be loose. Same with the wear marks on the piece from the blue train. After the incident? Obvious. That morning? No one saw it.

If that's accurate, it would seem that this part on more than one train was coming into contact with the track in some way on a regular basis.

I was about 50/50 on it reopening before this, but from where I sit the scales just got tipped pretty heavily towards buh-bye.

^ I do agree, however, that part of it being closed for 2022 has to do with the ride more or less being a crime scene from a legal perspective.

At Knotts today (the crowd is BY FAR the busiest I've ever seen here) and Xcelerator and it's brand new paint job are in top form. So is the insane amount of line jumping, but that's a different story.

I really think IMO that CP/CF are gonna evaluate every option with TTD in regards if they want to re open it for 2023 and what the have and need to do etc also if they decide that there gonna just get rid of it and put together a plan to do so and when! I hope the ride reopens in 2023 but if they decide to remove it I'll be really really sad but i will understand completely with that decision!

For what it's worth, the report also includes photos of the damaged track sections. I have no idea how serious (or not) the damage is...

So take these musings for a grain of salt from a diy/home garage mechanic but looking through these pictures I have a question.

In attachment #3 (photographs from ride inspectors) pages 62 and 66 they have photographed what appears to be old magnetic brake fin L brackets for when there were more permanent position fins. Page 62 there is a picture of one of these brackets severely bent into what I would imagine is within the operating envelope of the sensor flags. The wear patterns on that bracket and the documented cases that other trains are showing wear makes me wonder if something towards the center-line pushed that bracket into the position it was in? Could some other part have initiated this event then?

It also makes me question how often this happens without being noticed by the public. What if the same thing happened to MaXair* to where some part of the ride came off, and just went unnoticed to the public but not to ride operators and mechanics. The park isn’t required to explain why a ride may be closed. But they had a lot pressure this time around because some guests witnessed the accident. If that plate happened to fly off into the lagoon instead, yeah Dragster would still have been shut down (once it was noticed by employees) but then we wouldn’t know the reason.

The ride would have stopped itself in that case from the ride controller conversations I've had at Winter Chill out. Each flag (train) has to be counted and one missing would likely have caused a error shutdown as it wouldn't be counted at the next bank of prox sensors?

That may be true. But then shouldn't the ride have automatically gone into E-Stop due to the missing plate? According to the report, the E-Stop was manually hit by employees at the control booth.

Good point, I hadn't thought about that.

Also with all the errors over the years there may be a buffer for errors like one flag missing built-in. I'm sure it was logged somewhere but I wonder if it was a pending error (something that may have been confirmed as it moved through the station?) or it was logged but hadn't shut the ride down yet.

Unfortunately for the guest, the immediacy and criticality of the situation with the guest means that the right ops estopped it much sooner than the computer ever flagged it if at all. But you do open an interesting point of what it would do if it had not landed in a guest area.

If it had landed in a non-guest area and another train launched with the track in the condition it was is in, something else bad could have happened. 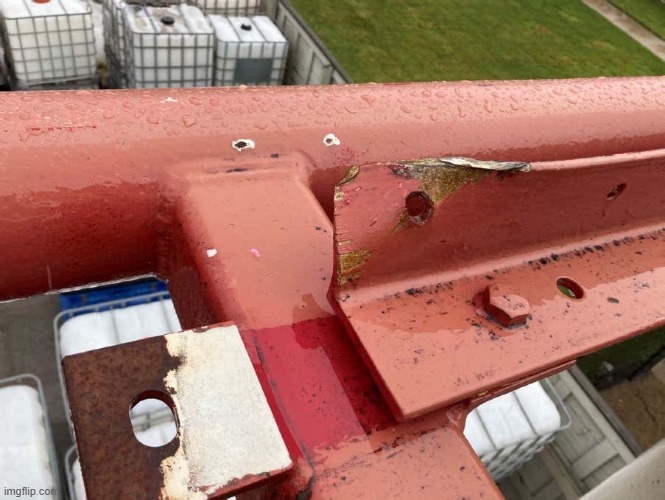 Thank you Kevin, that's exactly the picture I was referencing. Wasn't sure of a good way to embed it though.

I hadn't even thought about that either, but I'm still wondering how it got into that position in the first place.

I would think continual impacts with the flags would have pushed it away from their operating envelope and not pulled it in further?

That may be true. But then shouldn't the ride have automatically gone into E-Stop due to the missing plate? According to the report, the E-Stop was manually hit by employees at the control booth.

The report doesn't really specify that I saw, but I'm wondering if the ride did e-stop itself (or went to an error state and wouldn't allow another dispatch) but wasn't noticed by the ride ops due to the commotion and the entrance host signaling for a stop. Granted I have little actual knowledge about how ride control systems actually operate.

I wouldn't be surprised if TTD is done for good. How many more accidents need to occur before finally pulling the plug? As Jeff mentioned, the ride has been a maintenance headache from the beginning and expensive to operate. Just a couple years after TTD opened, Dick Kinzel himself even admitted it was a mistake.

That photo I believe is one of the rails that they attach brake fins to. The magnet sandwiches are attached to the train above that level, so I don't think anything else under the train would likely contact that spot. But the flag on the port side bogie, if hanging down, certainly would.

This is sad news, but not surprising. On one hand, I love TTD. It's one of the only rides left that inspires that delicious tickle of absolute terror in me when riding in the front seat pre-launch. On the other, as people have said, it's a very finicky piece of machinery that'll go down if somebody sneezes in its general direction. Add to that fact that the incident that closed it isn't the first involving parts getting lost and people getting hurt, just the worst.

Do I want to see it reopen? Definitely yes, as soon as it's deemed absolutely safe to do so. Will I be shocked if it isn't? Not particularly.

TTD had a good run. Remove it, and that's plenty of great room for a medium sized coaster and maybe one or two flat rides.

That's the tricky part. The plot of land TTD currently sits on is very long, but also fairly skinny. Maybe a couple flats could go in there, but I'm trying to picture what kind of coaster could.

Apparently I'm the only one who remembers that midway around 2002.

I wasn't visiting back then. Corkscrew's been around a long time. Power tower was 98. Was Himalaya always there or did they move it? What was that area like before Dragster? Guessing a lot more trees.

There’s a lot more room there than some of you think.

Apparently I'm the only one who remembers that midway around 2002.

Before TTD that was the location of Troika, Chaos, and Schwabinchen. One of the two Dodgems sat about where the superstructure is for TTD.

It was nice on that midway where the lagoon (full of carp) stretched behind those rides.