I am not really seeing how the brake run was "defective." It was a bunch of static copper fins and magnets mounted on the bottom of the trains. I'm not really sure how you could modernize or make that any more safe. It does seem from the maintenance reports that there were some issues with bolts working themselves lose over there, probably due to constant vibration. Maybe they could have used the triangular or box track instead of the flat stuff and it would have reduced some of that although maybe not so much for the stuff mounted on top of it. It seems to me that the issue that occurred with the train could have just as easily happened on the launch side and possibly hit someone on the midway, on the bleachers, etc. That's why I don't really get all this talk about moving/covering the queue unless you're also going to do the same with the midway.

The launch on the other hand and everything to do with the blocks/movement of trains around the unload and load station were always problematic and overcomplicated. The trains never moved together like they were supposed to despite hundreds of proximity switches in place to allow for it, meaning it was more efficient to run with 5 trains vs 6. The hydraulic launch was a beast, but really hard to keep operating. The cable and catch car had several incidents over the years that they probably got lucky with. I would guess that they might simplify the control system, run 4 trains instead of 5 or 6, eliminate the separate unload station, thus reducing staffing requirements, and hopefully get close to the same capacity.

Now that we know the original launch and parking systems are gone, if we assume a conversion to an LSM system, I don’t think it’s too much of a stretch to consider…

B) The tire-drive systems are also gone. Those tires can’t do anything that a couple of LSMs and a friction brake can do, probably better.

I can imagine that both of those changes might make the park more comfortable using a stiffer track, something with some kind of a backbone, if only to have something to attach the hardware to.

Again, I suspect that the old 4-rail launch track is probably going to stay. I could obviously be wrong, but from a project management perspective (particularly after I saw how they built those Lakeside picnic pavilions) I still think if they were removing that track it would make more sense to get the sections on the ground *and then* strip the switches and other hardware. That, and while it would make great sense to pull all the actuators and switches, why bother removing the brake fin mountings if you’re going to scrap the whole piece.

Another thought, in order to extend the launch just a little bit, might we see a conversion from a sliding transfer table to a switch track? Doing that would require reconfiguring the storage tracks but would allow the launch to be maybe 30’ longer. I don’t think the launch extension necessarily makes sense, especially if they retain the pre-launch staging location. On that note, though, one thing to note is that with a magnetic launch, there is potentially no recovery time for the launch system. There is no need to stop and hook up to the launch system; just roll out and go. When the train clears the safety brake, the next one can go, and that laughable 45-second interval the ride was supposed to have actually becomes possible! Now if only the loading process can be simplified enough to get the train loaded and checked that fast. They could turn the ride into a capacity monster to rival Magnum!

45 seconds doesn’t seem that far of a stretch!

when both crew and Dragster were running optimally, I always marveled at their cycle times and found it quite impressive. equally impressive was not only the down time, but the people who would camp at the ride entrance when repeatedly told the attraction would NOT open today!

Still holding out for a new track layout that then rolls into an LSM launch up the tower, like how Maverick has its launch mid ride.

This swing launch / back spike rumor is the most laughable idea I've seen to date. Just for comparison sake, Power Tower (adjacent to this mythical spike) is only 300 ft tall, and the latest "rumors" I've seen propose the back spike is 400+ ft. The aesthetics of that alone is enough to disqualify it, lol...

It's not a rumor, it's wishful thinking. It's based on imagination, not knowledge.

Can't somebody just fly a drone over there and see what's going on?

I'm sure nobody around here has any issues with that...

We need someone like bioreconstruct up here to constantly take aerial photos from a plane.

Clearly one of the Disney vloggers evacuated to Ohio. You guys, that's all that's going on!

Now that we know the original launch and parking systems are gone.

I can’t help but wonder: will they be back? Perhaps retrofit the old tack with new components? It would likely be easier to do so in a workshop (especially during the harsh weather off season).

I do imagine that if they go the LSM route, you have to reinforce the track because there's no vertical triangle action there. That's fine if you're pulling the train with a cable, but with motors in the track, the train is pushing off the track itself.

That makes total sense, but this shows that isn't really the case, either.

I think the tunnel launch on Maverick, and even Cheetah Hunt's launch tracks are just flat, too - but Maverick is in the tunnel and I don't have any photos.

Yeah here's the best shot of Cheetah hunt i could find. Flat track but significantly more posts and footings. I was wondering if additional foundation work would be needed https://rcdb.com/9456.htm#p=33641 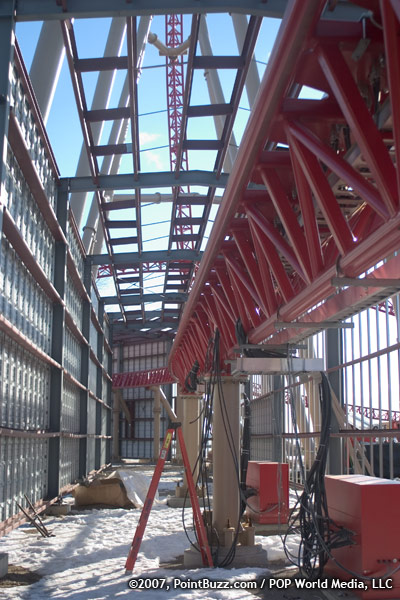 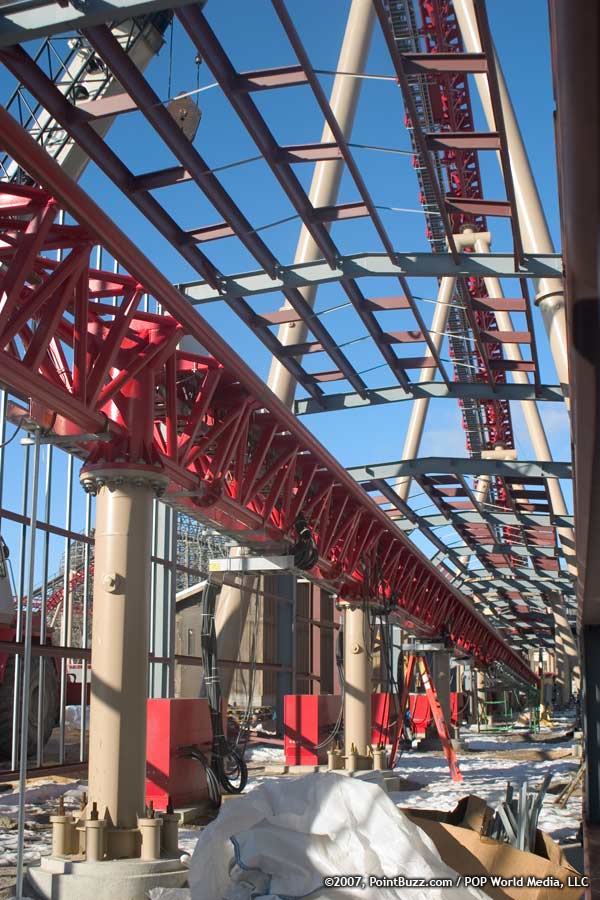 As far as LSMs go, I don't see why the LSMs couldn't be applied to the box track. The horizontal forces of a LSM launch is going to be similar to the force the brake fins apply at the end of the ride, and on both Dragster and Maverick the brake run was / is neither the box nor the triangle track, but the two tube track. Then again, see how well the brake run worked out for them on Dragster. That said, I suspect the main reason that Maverick has the triangle track in its launch has more to do with the fact that its more cost effective than the box track, more so than structural reasons.

According to Cedar Point Nations FB page a significant amount of track has now been removed; on the launch side all track is gone up until the point where it turns vertical, and a majority of the brake run is missing as well.

As more pieces disappear I start to wonder about the LSM conversion theory. It still holds water for now given what’s been removed, but at what point do we start thinking differently? When vertical track disappears?