Of course, since they did announce that Wild Mouse on the Boardwalk today, I don't know.

I had another account called "Point of View" but lost it.
Fav CP coasters: Steel Vengeance, Millennium Force, Valravn, Maverick

I’m starting to lean towards the others in that there may not be an announcement for Dragster’s reopening any time soon, if not, at all.

I'm still going to stand by the fact it's anti-consumer to be selling passes when you won't tell people what the expected lineup will look like.

The expected lineup is listed on the website. Pretty transparent if you ask me.

Beanie said:
Huh? No one said anything about the victim here.


I agree, you never said anything about the victim nor gave the victim any consideration as to why TTD has been shutdown.

Can you see One-Eyed-Willie from the top of Magnum?

A New Point of View said:

I am not sure if it has been mentioned here, but there are rumors that people have overheard the TTD engine noise on the park's PA. I find this odd, as it would seem as if the park is flirting with the ride's return. I understand that enthusiasts are excited about it's return, but I truly think the most tasteful method is to just open the ride up come Opening Day 2023 (if they so choose), and not to do a big re-opening campaign. We have to remember the context for why the ride is not operating, and the context of celebrating its return can be very misconstrued.

I thought I heard the noise as I was walking in the area on Wednesday. Stuck around for another 5 minutes but didn't hear anything again.

I have heard it. Took us by surprise.

djDameon said it on another topic yesterday, Tony did say Wild Mouse is the 18th coaster so that leads us to believe that TTD is going to open again just a matter of when….

At the park currently, and just finished watching the celebration show near Iron Dragon. And when they sang about each coaster to solicit crowd cheers, I don't recall them mentioning TTD

Been visiting yearly with my now wife to celebrate our anniversary since 2010. Proposed on top of Valravn in '17 during the Sunrise Thrills Tour. Proud owner of two bricks in the Legacy Walk and have a piece of Wicked Twister

Dragster was mentioned in last years show, but they removed it from this years list. Was hoping they'd add it back in, just as another hint, but the show/parade's done this weekend anyway.

Tony was live on Twitter yesterday for a Q&A. He mentioned that there is no update to give regarding TTD at this time. I can’t seem to find the video now, but TTD was addressed, but unfortunately that’s all the info he gave at this time.

If an official update is ever given, it’ll happen in the quiet of the offseason.

The motor noises coming from TTD have been going all season, I recall hearing it while in line for PT in May.

Not sure if this ride has been brought up in this conversation yet, but I completely didn't realize until a few minutes ago that there's actually a third launch/tophat/(hill)/brakes Intamin coaster besides TTD and Kingda Ka, Red Force at Port Aventura. Honestly it's even closer to Dragster than Kingda Ka in a sense, since I hesitate to call its 'hill' into the brake run an actual hill.

That being said, it does indeed have an LSM launch instead of the cable launch, and I used the very scientific method of measuring the launch track distances on Google Maps to see how they compare.

Red Force is ballpark 493 ft and is probably closer to 500 since the launch starts a little ways inside the station and I was measuring from the point where the track appears to where the launch catwalk ends. And that's to get to 112mph/367ft over 5 seconds.

I've got no point of reference for how much acceleration a length of LSM track conveys, but if Red Force is hitting 110mph over 500ft, one would think the extra +/-140 feet of track on Dragster would give it the rest of the oomph necessary to clear the tophat.

Might be a more gradual acceleration, though I wonder how noticeable hitting that speed in 5-6 seconds instead of 4 seconds would actually be. And again, still not sure if changing the launch system actually solves anything related to the incident, but at least in terms of thinking long-term maintenance for Dragster, an LSM retrofit does seem like it'd be feasible over the existing length of track.

If its gonna go electric, maybe get Elon to sponsor it as Top Tesla Roadster?

You don't have to advertise a product that is sale backlogged six months.

Due to popularity or production problems?

I believe the word you're looking for is "demand".

I'm really stretching for hints here, but has the "Pit Stop" stand near TTD's entrance been there for a while? Looks like it's new, or has a new coat of paint on it. The popcorn machine is wrapped up. I probably just don't remember it being there. Tried looking into it, I see there was a "Top Chill Snowcones" stand there that was removed after 2017. Anyone have a better memory, or better research skills than me? 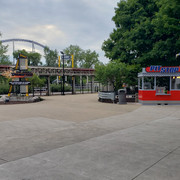