Cedar Fair needs to hire Buc-ee's to handle all aspects of their restrooms.

If you kind of draw a line along where Perimeter Road wraps down past Breakers and ultimately rejoins the midway, you've got the newish corporate offices south of it along with Melt and the catering/banquet buildings, and to the north of it, you've got the water tower, the site of the gold dorms, and all the backstage buildings immediately behind Corkscrew. I'm pretty sure the southernmost building is or was a powerhouse/utilities building at some point.

This may be reading way too much into it, and I'll be the first to admit I don't know what all is actually located in that parcel, but I also know that most of those buildings are pretty old and were built to wrap around the dorms that have been gone for just shy of a decade now. For as much as the park has been slowly modernizing the backstage stuff (e.g. the newer employee dorms, the new park offices) I wonder if all the facilities in that area could be due for a teardown and rebuild.

Not saying this has a ton to do with moving Matterhorn and Scrambler, but if they wanted to get heavy equipment into that corner of the park without lugging it all the way around perimeter road, that'd be one way to do it.

Ok. Not much to say on the Boardwalk tbh but since they are moving Matterhorn and Scrambler and seemingly opening up that area. Knockdown Corkscrew, Super Himalaya and Power Tower. On that side of the midway build a Motorcycle/Jet/Racecar themed coaster to be a “sister” to TTD. Rename that whole midway from the end of Sky Ride to Magnum “The Valley of Speed” or “Adrenaline Alley”. And lean heavily into a Racing/Extreme Sports theme.

Moving Scrambler and Matterhorn could help clear some extra room, with the removal of a few buildings and possibly Corkscrew. Bit now I'm into future speculation. Like an ADHD diagnosis for the enthusiast in me.

This area is exactly as I pictured it, especially after it looked like a Grand Pavilion was coming. A mouse by Windseeker and flats scattered along a boardwalky-like stretch.
I’m going to have to express some disappointment here. When I pictured flats I expected at least one new ride, not a relocation and “reimagination” of old-assed flats. No amount of LED lighting will say new to me- some of those rides are 50 years old. I thought CP would invest in an exciting looking ride like Nebulaz or something similar. To put Scrambler practically next to Calypso is just weird. And the mouse will be ok. I know we’re not to rely on artist’s renderings but it looks like it will be one of those off the shelf Mauer spinning rides that we can already find at many places including Waldameer and Hershey. And if CP wants to nod to the past they should name it Scamper. Wild Mouse operated maybe 2 seasons and wound up being a place holder for Mill Race. Scamper lasted a little longer, til 1969.
The Grand Pavilion looks just awesome, and so Cedar Pointy. To answer a previous concern, it looks to me like the outside Boardwalk will have to end like it used to where Windseeker’s admission gate is and guests will no longer be able to walk from the parking lot. (Who was doing that anyway, really? This is a better use of wasted space) I predict the Pavilion will be accessible to ticket holders only, and from all four sides. Beach access from there will be prohibited, again like it used to be.
Lastly, and I’ll have to double check, but they are listing these rides as Boardwalk- Wild Mouse, Matterhorn, Scrambler, Calypso, Giant Wheel, Dodgem, Troika, and Gatekeeper. Fine, but if you were maXair, wouldn’t you feel a little left out? The entrance is on the lake side of the ride and it sure swings out over that midway. So what gives? Maybe the plan is to eventually move it to where Scrambler and Matterhorn were and open the spot up for expansion/renovation of Kiddie Kingdom.
That’s all. I’m more excited by Carowinds. And are we looking for something from Kings Island yet?

I assume that's presuming that TTD is staying. As much as I kinda like those names, that midway up until the Magnum entrance is bare bones enough, and that'd make it so you'd have over a quarter mile of just a coaster on one side and a coaster on the other side.

Edit: and to respond to some other comments since then, it sure does feel like Carowinds has been getting the more thought-out additions as of late, but going too far down that route's inviting the same sort of arguments about whether or not CF corporate should move down that way.

Last edited by That Crazy Dan,

As someone with a 4 year old and a newborn, I'm really excited that they've made this area of the park a little more family-friendly than other areas.

Instead of trekking all over for these rides, they're now in one area where we can access Planet Snoopy, KK, and rides for slightly older kids and up right here with a restaurant available. I think it's a huge win, honestly.

I do agree with RCMAC that a new flat would've been welcome, but I also understand where the park is coming from too. If they have plans for that Sky Ride station area, you can't just move one of Scrambler or Matterhorn. It makes sense to move both to free up more space.

I think we're looking at a huge refresh of that area soon, all the way up to Pagoda.

Just because nothing was said about TTD, don't assume anything one way or another. That and stating that the Wild Mouse will be the 18th coaster. That figure can change at anytime.

The Grand Pavilion looks just awesome, and so Cedar Pointy. To answer a previous concern, it looks to me like the outside Boardwalk will have to end like it used to where Windseeker’s admission gate is and guests will no longer be able to walk from the parking lot.

In the video it shows the boardwalk extending toward the Windseeker gate and toward Gatekeeper.

To answer a previous concern, it looks to me like the outside Boardwalk will have to end like it used to where Windseeker’s admission gate is and guests will no longer be able to walk from the parking lot. (Who was doing that anyway, really? This is a better use of wasted space)

I did that regularly prior to this season and was looking forward to being able to do so again next year if possible, but I won't be butt hurt if I am no longer able to.

I'm not to familiar with mouse coasters. I went and looked up Waldameer and Hershey. The Waldameer layout looks closer to the rendering than Hershey. How standardized are these rides? Is it likely this will be customized in any way to cedar point, or does the rendering exactly match an existing ride?

djDaemon beat me to the video about the boardwalk ending. The picture not very clear if those are doors or not, and what's that building to the left?

Maxair is still shown in the same spot so I wouldn't bet on it moving soon, that whole side of the midway looks unchanged. wonder if that means Roost will be opening next year.

Now that you mention it, it does not look like Grand Pavilion is accessible from the beach side. No idea what that building is, maybe new bathrooms? 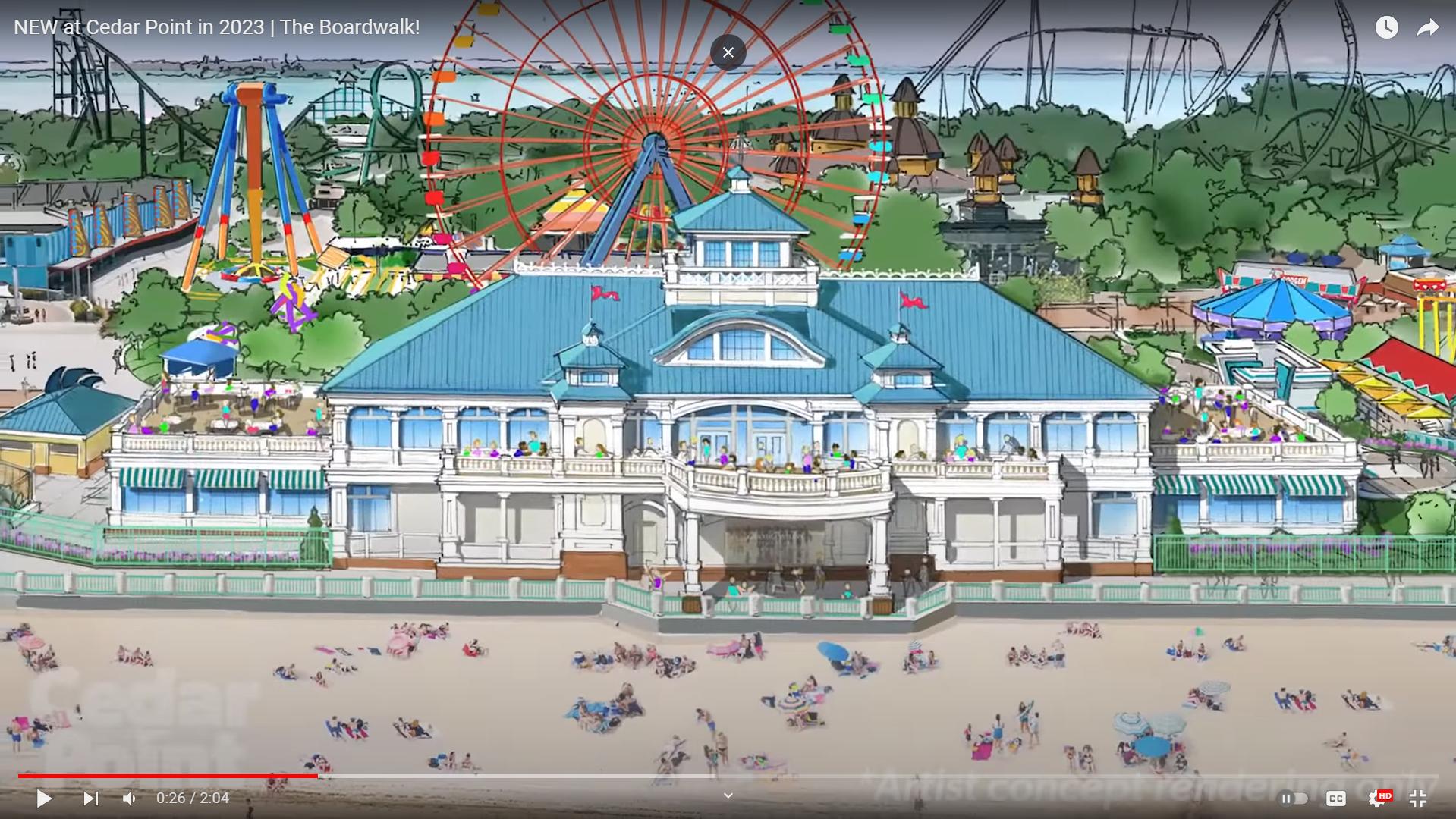 I actually got that. Longest acronym award!

The building to the left of the Pavilion is the housing for GateKeeper's lockers, right?

One thing to note with capacity for Wild Mouse is that this is one less car than what Wildcat had. Even then, I'm not sure they always ran all 7 cars. I know that ride wasn't capacity heaven, but it isn't unprecedented in recent Cedar Point history to have a ride like this.

My son is at 42 inches right now, so this will be a nice, smooth stepping stone to the bigger rides (if I can get him to ride with me, of course).

It just occurred to me, but Matterhorn is going back to the beach. It used to be located next to Wildcat on the beach, before being replaced by Avalanche Run in 1985. After sitting on this, I am happy. It will be a fun, relaxing area of the park, and really awesome at night, and I have been complaining for years that this area needed to be more open to the lake/beach views. Having the Scrambler on the boardwalk with a light package is going to be really awesome. My only argument, I really wish a brand new flat was going in, such as a Zamperla Nebulaz, which I think would have been perfect in the basketball toss section behind the Coliseum, between both dodgems, and really rounded out the area 100%.

GK's lockers are currently housed under a blue canopy, which you can see beyond the new building in the image above, just above the outdoor area on the second floor.

You're absolutely right. I couldn't remember if they were that close to Troika.

I'm guessing that building will be bathrooms then. The only one in that area that I can think of is next GateKeeper behind the games and I don't think they've updated it in years.

Ah. So maybe the beach walk will stay the same with modifications to slip by the building. Maybe there will be a walk up concession on that side of Pavilion, but no access to the park side of the building.
hell, I dunno.

A walk up concession would be a neat feature.

What a beautiful addition to the park. It's bigger and better than I imagined, and I can't wait to see Matterhorn and Scrambler in their new homes with some TLC and new lighting.

My grandma used to tell me about riding the old Wild Mouse with my mom; really neat to see it come back this way.

I'm endlessly amused that the rumor I made up 22 years ago is finally coming true! Told you it would happen!