Is Pac-Man Fixed or Replaced?

I was so eager to play the original Pac-Man last year unfortunately the machine was out of order and I really didn't feel too crazy about playing Ms. Pac-Man since it's not a " sped-up chip" version I see at other places.

Did they fix the first Pac-Man at the Midway Arcade?

Sorry to tell you this, but a lot of the classic machines are gonezo. There's still a lot of fun games in there, though, including giant Space Invaders (which I highly recommend, it's a blast.)

It is probably in the dumpster. I have a feeling that the arcade won't be around much longer.

ok but you still haven't answered my question- is the original Pac-Man (NOT Ms. Pac-Man) fixed and working?

Here is a picture of the game for those of you who don't know (I'm sure a lot people growing in the 80s will recognize this): 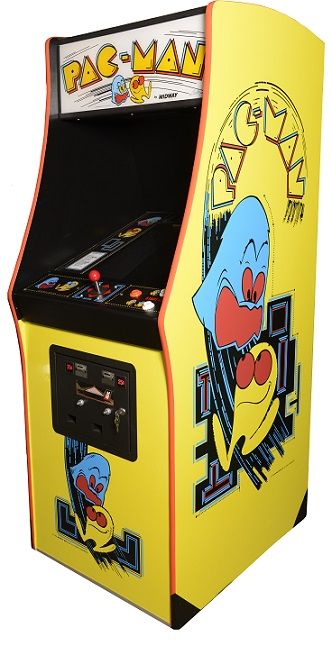 Well during the interview with the CEO a few months back he said he would like to make better use of the old collosium where the arcade is currently located. Conspiracy theory would hint towards that building be repurposed.

dibs on some of the machines like the broken Pac-Man and one of the stackers (the prize game with the stacking light blocks) if that were EVER to be true, plus Monopoly Stern Redemption, Cyclone Barber cut and Whac a mole.

No idea how much cash it brings in...but, if youve been in there during a rain shower, it can get pretty busy. The only true expense would be electric and a few folks at the prize counter. As well as repairs.

We are guilty of hanging out during rain and also a place to cool off on a hot day. They keep it awfully cool in there!

As a child of the 80’s, it’s really sad to see what’s become of the arcade. Lots of the older machines that are still there are not fully functioning. Seems they don’t feel the older machines are worth the investment in fixing. Newer games and redemption games probably bring in the most $$$. I could see them possibly splitting up the bottom floor and having a smaller arcade and doing something else with the rest of the space.