A torque wrench can definitely over-torque a fastener when used improperly, since many torque wrenches can still turn the fastener beyond the point where the wrench indicates proper torque is reached. And a fastener can be under-torqued if the friction between the fastener and mating surface produces a false positive. And then there are maintenance of the wrench - leaving mechanical torque wrenches loaded when not in use, and/or not having them calibrated at regular intervals, etc.

But yes, when used and maintained properly there is a low probability of over- or under-torquing.

I can say from almost 2 decades of maintaining an airplane that, along the lines of what RideMan said, bolts will stretch over time from repeated torquing, even if torque is properly applied each time with a recently calibrated torque wrench, and eventually It is possible for a bolt to become fatigued from this over time. Not saying this is what happened, but seems plausible to me.

It is also possible that, if the torque wrench hadn't been calibrated recently, bolts could have been over-torqued. There are strict requirements for peiodic torque wrench calibration in aviation, but I dont know what the protocols are for amusement ride maintenance.

Do we know what her condition is or if she is still alive?

I would expect that the bolts in the plate we're talking about are probably not subjected to frequent mechanical torque checks. The part just isn't loaded in such a way to make that necessary. In other words, I am doubtful that the failure of the bolts was the proximate cause of the incident. I think it far more likely that the bolts failed because when an irresistible force comes into contact with an immovable object, well, something's got to give. And the bolts are probably the weakest object in that assembly.

Since this part isn't really doing more than anything aside from "hanging on" the bottom of the car, Dave, I tend to agree.

The question is, what was the immovable object, and how to it come in contact with the irresistible force?

Does the piece in question which I believe some have called a sensor plate, align with the track rails or is it offset towards the center to align with sensors? Are there two plates, one for each side or just the one to engage with sensors? Also, what is the clearance distance, as a slight protrusion of any sort could initiate the contact. Investigators should be able to identify the first point of any impact, similar to vehicle accident investigators at a scene.

I agree it likely wasn't a nut loosening off of a bolt unless one of the two nuts loosened enough to be "almost" off of the bolt thus being able to inappropriately contact irresistable force. Not likely, just wild speculation.

The plate (there appears to be one on each side of the train) can be seen in this photo. It's hard for me to say how close the part comes into contact with anything. 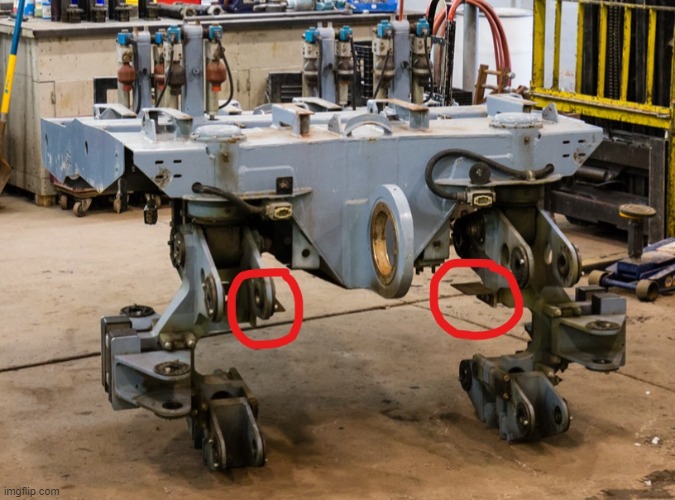 Kevin that's an awesome photo! I honestly had not looked off the forums to see what part was being referred to. My best estimate looking at that picture and where those sit on the track and the following image of the station just before the launch, those are precise sensor flags for train positioning inside the station and block sections. Also looking at where they sit relative to the magnetic braking fins if one of those fins were to be out of alignment (Yes I'm aware there'd be a lot of other issues that that would cause as well) that would be the closest object I could estimate to come in contact with it.

This is all just based off of the imagery and seeing what's there but it does put a much better picture together than I've had before.

Reference picture of station because I don't know how to upload an actual image:

So, in the picture Kevinj posted we see that the plate is fastened through two holes on the vertical section of it. It appears the horizontal section is solid, with no holes. What type of stud/nut/bolt/locknut/cotter pin method is used is unknown and whether it is inserted through the track side or non-track side. As that heavy coaster comes down at 120mph and then attempts a quick deacceleration there is a tremendous amount of vibration occurring, so if clearance for that piece is minimal to begin with, any variation of an object could result in the contact.

Now that I think about it, I'm pretty sure I've seen metal on metal contact/wear marks on the fins about that spot, this is complete conjecture on my part but Jimmy I agree and definitely see possibilities with this theory.

If the fins are rubbing on anything, it's on the magnets that they pass through.

A photo of the plate shows what appears to be a countersink on the plate (or is that just a lack of corrosion under the bolt heads? I haven’t looked at the photo in a while…) and the State statement indicated that the broken bolts were retained within the chassis which suggests to me that the bolt threads into a blind, threaded hole (so no nuts). My guess is that the bolts are probably cap screws with round socketed heads.

For the record, I have no idea what that plate might have hit (before it went flying, I mean).

Right, Dave, your observation of the hole possibly being threaded, with no attached nuts is possible. I'm not certain what amount of vibration that form of fastener can withstand without working loose, but it may not have worked loose whatsoever, it could have been something protruding into it's path of travel. It should not be too difficult for the investigators to locate the first point of impact, or for that matter the only point of impact. And, whether the plate was ajar or whether something within the track area was out of place such as magnets.

On another subject regarding the incident...what do you guys think will be the modifications Cedar Point implements to Top Thrill Dragster? Enclosing the queue/moving it could work but what if they just enclosed the brake run itself? With some sort of roof with slanted siding at least from the Finish Line to when the train is going less than 30-40 mph. Might be interesting to speculate changes before seeing what actually happens.

Also I've heard from a credible source that the woman who was hit, Rachel Hawes, is alive and out of the hospital now. This to me is amazing news because it seemed at first the degree of her injury was extremely serious to the point of life threatening.

So the flying parts can ricochet around inside as the train passes through?

I don't know man, lol. Just spit balling here. Something that is not too tightly enclosed but spacious enough on the inside with air vents or openings near the bottom for air flow. If any flying parts were to happen again hopefully the train would already be speeding away from it so the ricocheting part wouldn't be an issue and any guests waiting in line below would be ultimately protected. This is just an idea/one option out of many potential adjustments for the rides reopening next season.

That One Coaster Guy

When was the last time the Dragster queue was completely full? Could you shorten the overall length but enclose it with full buildings? Could have AC, angled windows every 10 feet or so that continue to give everyone views of the top, and could add additional theming into the buildings. Could be a cool way to make the queue more fun and add some theming while protecting guests.

Or, perhaps, re-route the queue so that the area under the ride is devoid of paying customers?

With BOB moved to the island, that paved path and real estate could plausibly be used, with modifications, as a new not-under-this particular-ride queue.

The only thing to contend with there would be some hats falling off people riding Iron Dragon... (more than some, it turns out).

I've thought about the reroute, how would it get back in and interface with the station away from the break run? Bridge?

It's a huge stretch to assume they need to employ any mitigative strategies, given TTD has provided many, many millions of rides without this happening.

That said, a netting that can stop/redirect the object and the object's energy would be relatively trivial to implement, I would imagine. Think something like the netting used beneath lift hill stairs, only more elastic and situated vertically and strung between fence posts.